This is a re-posting from my old blog, dated 05 October 2008. Even though we are nearly rid of Blair, who has been paid handsomely for the damage he did, the other things I mention continue to be wrong.

I thought I would start with an attack on Tony Blair, to get me warmed up to my theme for this more lengthy than usual posting. Tony Blair went to expensive private schools, then to Oxford University, where he was in a rather unsuccessful pop group called the Ugly Rumours. He went on to steal the Labour Party, changing it from a democratic organisation that was there for the benefit of the British people into his own fiefdom. Party policy became anything he was persuaded to do in response to tabloid headlines, requests from insane American presidents, or of course God, with whom he had a direct personal connection. As a result, the country ended up being dragged into a war that cost thousands of people their lives.

Blair's unpleasant press liaison creature, Alastair Campbell, announced quite early on, when there was a question about whether Blair's religion was affecting the way the country was being run by him, “We don't do religion”. Of course, later it became clear that he didn't just do religion; he was governed by it, and made decisions based on his beliefs. He eventually decided to become a Catholic, or perhaps he had always been going to, as his wife was one.

When he stopped being prime Minister, he began being more public about his fondness for what the Archbishop of Canterbury calls “people of faith”. This is used, in case you have not heard the expression, to suggest that the members of lots of different religions form a cohesive community of fine, faithful people, who can all get on together in a “multicultural society” that includes all the decent religious people, and nobody else matters.

I have complained about the unpleasantness of this ganging up on the atheists before, so I really don't think it is necessary to underline the absurdity of people who claim that there is some sort of bond between, say, Hindus with their numerous gods, and Jews with Jehovah. The Muslims, in any case, have a holy book that says they should kill unbelievers. It is clearly not possible for all of the religions to be true simultaneously. I, as an atheist, am certain that none of them are. Even if only one of them did turn out to be true, the fact is that their claims of tolerance do not extend to tolerance of atheists. Blair's “Faith Foundation” is by definition a group of religions ganging up on atheists, and not the moral high ground he acts as if it is.

But that's all just by way of introduction, enough of the horrid Blair. My attack today is not against politicians who make lucrative careers out of their bizarre beliefs, while causing thousands of deaths, no matter how much they deserve that criticism. I am instead attacking the leaders of the Scout movement. 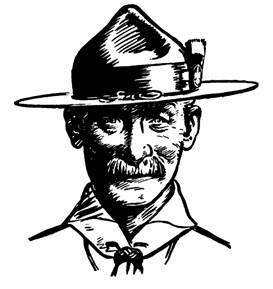 I want to make it perfectly clear that I am not attacking Scouts, who are mostly decent young people gathered together to learn all sorts of skills, and have a lot of fun together. Neither am I attacking the thousands of decent people who give up their time to run Scout troops. To show you what I am attacking, I am going to digress into a little personal history, which I don't usually do, as I am trying to write about more than just myself. I'm not that interesting.

Forty-eight years ago, I was a Cub. I didn't particularly think it significant, at the time, that the Cubs where I lived met in the church hall. But it came to the time when I wanted to move up to the Scouts, and it was explained to me that I had to take an oath, and swear allegiance to God and the Queen.

I'm leaving royalty out of this, to avoid further muddying of the water. My attitude to the descendants of the nasty guys with the biggest swords, and their assumed right to rule me has been noted elsewhere.

When I discussed this need to swear an oath of allegiance to a God I did not believe in with the Scoutmaster, who turned out to be also the local Vicar, he ended up preventing me from joining. Eleven year olds who thought for themselves were too dangerous to be allowed to join, I suppose. Those Cubs who didn't care what oath they had to trot out in order to get to the fun stuff, just joined without discussing the matter, and I am sure they had a good time together. I had fun my own way, without being a Scout, and mostly forgot about how annoying it was at the time.

I'm not sure about this next part. I suspect I am right in thinking that in those days, Muslims, Jews, Sikhs, and other non-Christian religions could not join the Scouts. Nowadays, they can, and do, and there is nothing wrong with that. They also allow girls to join, and so they should. I had noticed those things had happened, and, perhaps foolishly, had unconsciously assumed that there had been some progress, that times had finally changed, and that Scouting was now a decent, inclusive organisation. Well, it's a multicultural society, these days, and I thought we were all part of that society.

Why does any of this matter to me, at my age? Well, my son is a Scout, and he has a good time, and Scouting seems a worthwhile way to encourage public spiritedness and proper behaviour in the young. The local Scout leader had been complaining how short of adult Scouters they were, desperately so, and I decided to volunteer some of my time to help them. Naturally, there was a wad of forms to fill in, Criminal Records Disclosure to check I was not some child molesting monster, and some explanatory leaflets. On the last page of the explanatory material, I found something disgusting.

“e) Religious policy: The Scout Movement includes members of many different forms of religion. All members are encouraged to make every effort to progress in the understanding and observance of the Promise to do their best to do their duty to God; belong to some religious body, and carry into daily practice what they profess. The atheistic absence of religious belief is a bar to becoming a Member of the Movement.”

The shock was considerable. I knew Baden Powell was a Christian, and I knew that was why, almost fifty years ago, I had been excluded from the Scouts. But this is the twenty-first century, and we are Politically Correct. We are multicultural and inclusive. It had to be a mistake, surely?
I Googled. I Googled a lot, and what I found sickened me. You can be a Satanist, believe in the Flying Spaghetti Monster and the Invisible Pink Unicorn at the same time, you can sacrifice babies with a big knife, in front of a giant statue of Cthulhu, and you can be a Scout, or even a Scout Leader. But a normal guy who does not think there can be an afterlife, and does not believe in gods is absolutely excluded as much as dogs, cats and worms are.

Normally, I try not to offend anyone. But this time I hope to. Religious people are wrong about the Universe. We die, and that is that. There is no afterlife, no heaven, no point in sacrificing animals to Jehovah, no deity of any kind. It was all made up by people who were scared by the fact that we die. If you think I am wrong, you are mistaken. And stupid. I will change my mind if, and only if, your deity can manifest itself outside my house in the form of a hundred metre tall cat, whose colour is written on the piece of paper in my desk. That’s a fair test.

In the meantime, I can not help the local children, and the vile bigots running the Scouts can continue to pervert the minds of their more gullible members with the idea that they are inclusive, tolerant, and a force for good. They lie. They should be ashamed.