I'm a great fan of Greek food, ouzo, sitting in tavernas, Rebetiko music, and any combination of those things; I have been for ages. It's well over fifteen years years since I first encountered Matt Barrett's writings about those things on the web, and I've referred to his writings on Rebetiko on my own website's pages about that most wonderful Greek music. Here's a picture of him, enjoying those things... Well, it's a silent picture, so we can't really tell if there was any Rebetiko playing, can we?

I recently came back from our holiday in Crete, which was a lovely place, with plenty of good food. There wasn't a whole lot of fresh fish around, apart from a couple of splendid exceptions. And there was no sign at all of a dish Matt mentions, sardeles pastes. That's salted sardines. I should have gone to Lesbos, of course, as they specialise in sardeles pastes.

Mytilini town at seven in the morning is a beautiful place. Traffic is light and the air is clean. Already the market street is alive with fish, meat and vegetable sellers. I am instantly attracted to the fish shops which are full of sardines, anchovies, and mackeral for under two dollars a pound. ... I stare at the sardeles pastes, easily my favorite. These were caught this morning and immediately salted.

By evening they will be sold in the cafeneons to be peeled and eaten with ouzo, the Lesbian equivelent of sushi, and to my taste, superior. And at a thousand drachma a kilo, a hundred times cheaper.

I'm missing being on holiday, of course. So it seemed like a good idea to attempt to recreate this interesting dish, and sit sipping ouzo while nibbling at a few sardines. How hard could it be? The ingredients were, well, sardines and salt.

Tesco had some enticing Cornish sardines on its fresh fish counter. They looked a bit big, for sardines, being easily over three times as long as the usual size of sardine tin, but maybe it was because they still had their heads on? I bought half a dozen, and was pleasantly surprised by the low price. Removing the heads, and the guts is not particularly fun, so I just switch off and do it, without thinking too much about what I am doing. Perhaps I should have left the fish whole, as I'm sure they do on Lesbos, but I can't imagine that would add anything worthwhile to the eating experience. I'll cheerfully eat gavros, the much smaller fish that are fried whole, leaving only a few of the larger heads on the plate to puzzle the waiters, but these sardine heads were probably big enough for a Singaporean curry.

Packing the beheaded, cleaned sardines in cheap cooking salt, and leaving them for a few hours was all the recipe I had to go on, but for once, I think it's enough. We had a nice bottle or two of ouzo we had brought back from our holiday, which was handy, as Tesco stopped selling it ages ago. I wrote to them a while back, asking why, and was told it was because nobody wanted it. Thanks, guys, I'm nobody.

Now, it was time to see what I had made, and whether it was good enough to eat, let alone worthy of the ouzo. Incidentally, I've heard people bragging about how they drank large amounts of ouzo, becoming very drunk, and they seemed to think they had done something clever by not bothering with food while they did it. Matt again:

Unlike most nationalities, the Greeks don't drink to get drunk. They drink to enjoy life and drinking ouzo is an art form. Never taken alone, it is served with snacks called mezedes. My favorites are of course the sardelles pastes, octopus, and the simple tomato, feta and olive combo.

There are places called ouzeries in Greece, that specialise in serving lots of little dishes of very tasty food along with ouzo, which is served with plenty of ice and water. I would have liked to use them more, but we generally eat in tavernas, as these have food the younger member of the family will eat without being force fed. I couldn't recreate the atmosphere completely, though I did put some music by Markos Vamvakaris on while I did my taste testing.

Now, how to eat the little beasts? They have a lot of bones, which as I said, are alright to eat when the fish are very small, and have been cooked, but I didn't fancy trying it with these larger fish.

Matt describes his way of dealing with separating the flesh from the skin and bones in several places on the web, for those times when the person serving the fish hasn't done it for you. Here is his video of his method. Quite a few recipe scraping web sites have hoovered the description of the serving process up and presented it as the recipe for sardeles pastes, without anybody bothering to check whether it actually was a recipe.

Anyway, This is what things looked like, after I had managed to get the first fillet off the first fish. I admit it, I used a knife. But I was able to pull the bones off the remaining side. Sploshing them with a good amount of Greek extra virgin olive oil, and some juice from an Argentinian lemon, I poured a small ouzo, with a fair bit of ice (English) and began my taste test. 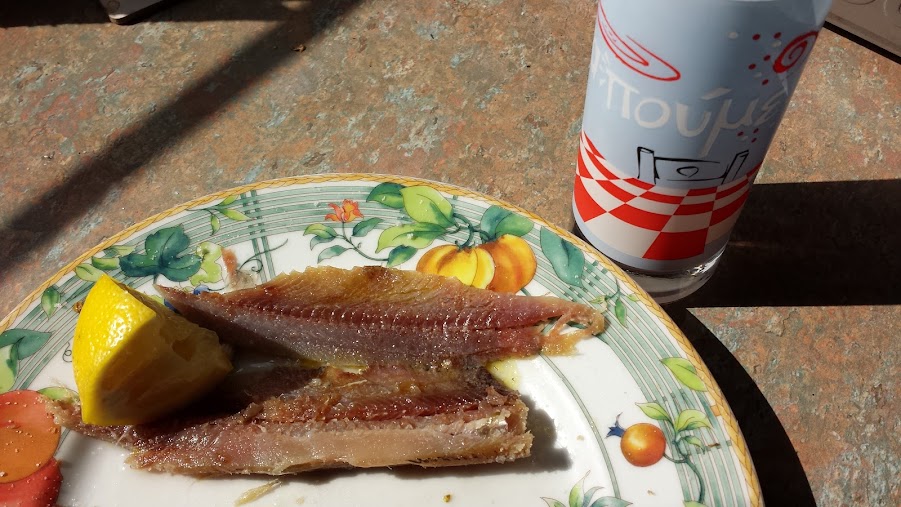 What can I say? The combination is good, very good. It's not too salty, provided you remove the skin, and the lemon juice and olive oil are just what the fish needs. Oh, and the ouzo is pretty much a necessity. Just sip it...

There is quite a lot of very fishy smelling salt left over, which it should be possible to dry out and re-use with some more sardines. Preferably rather smaller ones, I think.

I need to go back to Lesbos, just to check whether theirs taste like mine...
Posted by Doctor Dark at 11:44