There's something wrong with the "people" running Sony.

Only the other day, I bought what looked like an interesting Blu-Ray movie in our local Tesco mega-emporium. Elysium.

Well, I like sci-fi, and the case said it was going to be jolly exciting. And here it is, looking like a perfectly normal, sensible Blu-Ray case. 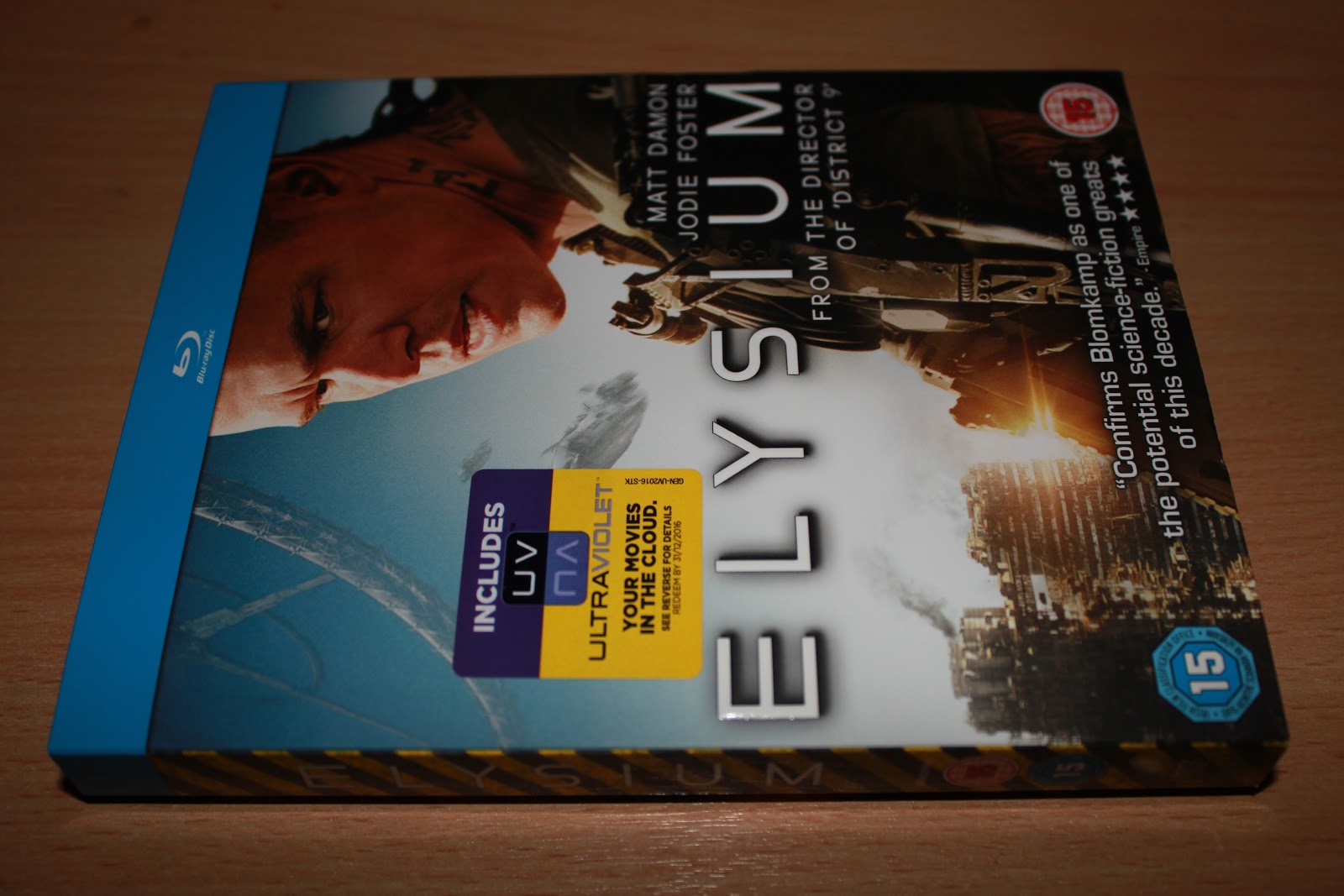 But I found something a bit odd on the rear edge of the case. What is this red button thing? Pushing it does nothing. No point keeping the sleeve on... 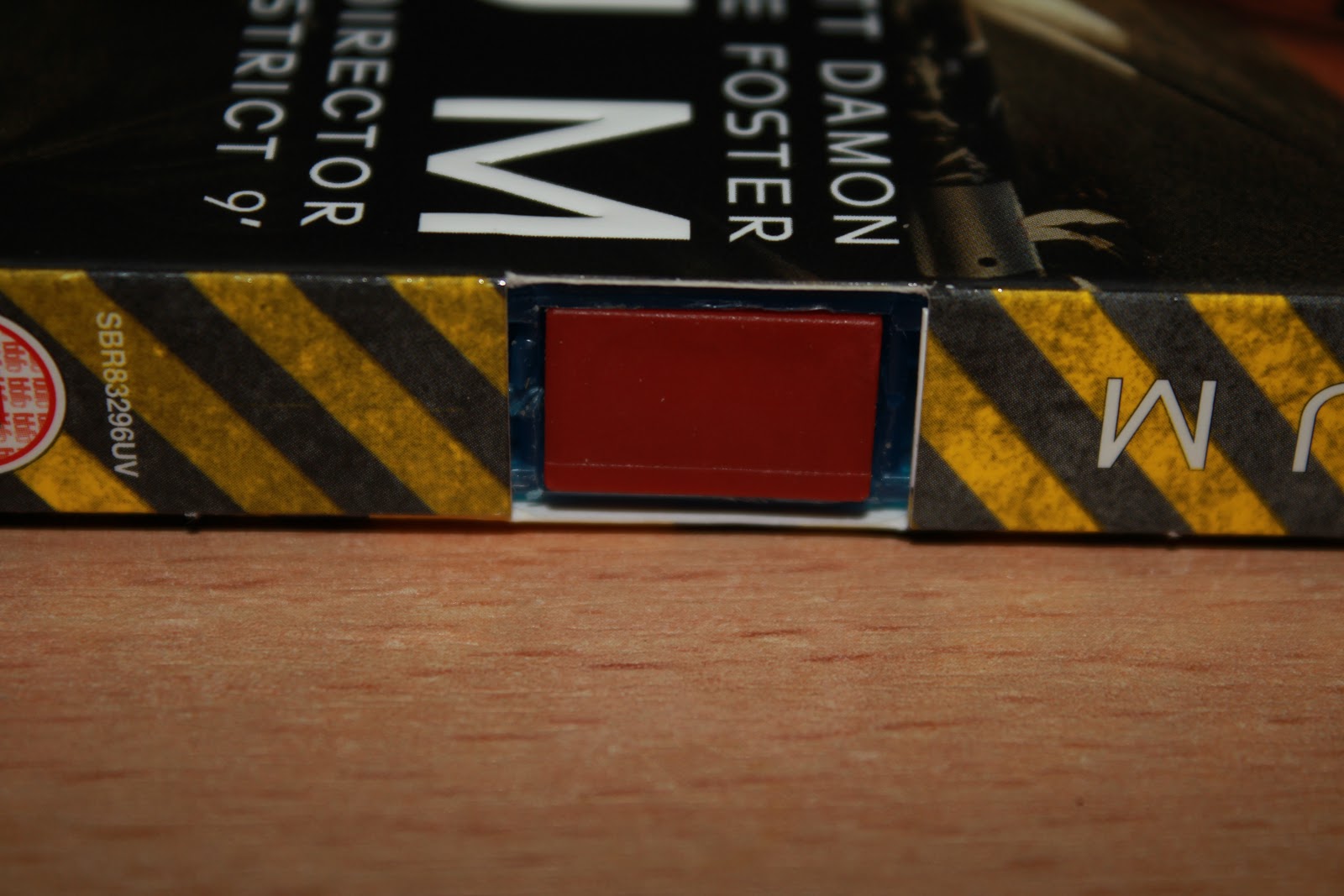 After I removed the cardboard sleeve, I spent several minutes trying to move the red button thingy, because the case wouldn't open. My wife almost broke a nail. It wouldn't shift at all, no matter what we tried, until I shoved a screwdriver into it VERY hard. Then the case broke. 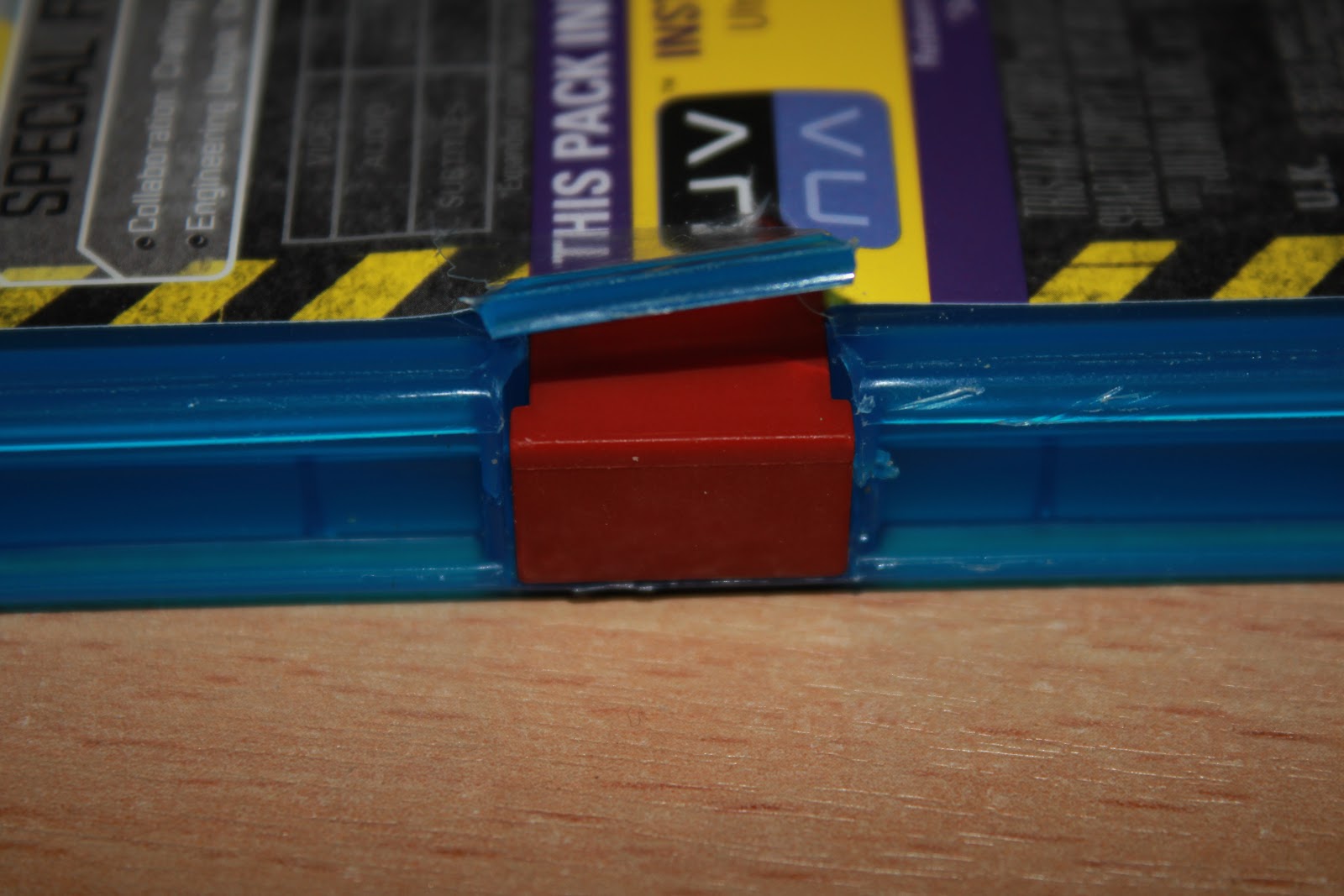 Great. Utterly marvellous, Sony. Thank you for making me break a movie case to watch the movie. That will look so good in our magnificent collection of Blu-Ray movies. We've got all those ordinary ones, and now we have one that has to be busted out of its case. That will look marvellous on the shelf. 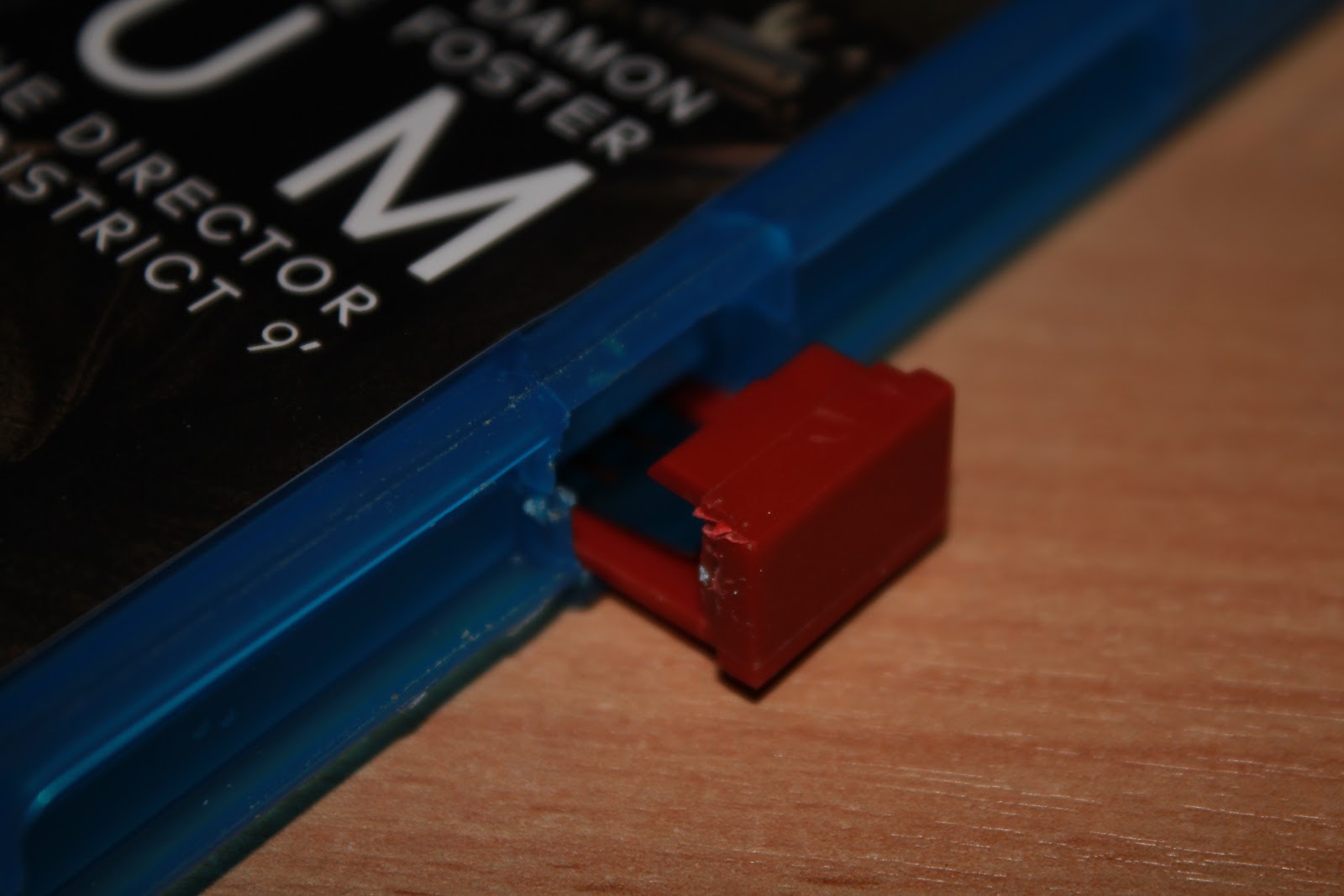 On opening the case, I found it was impossible to release the disc in the usual way, by pushing the button in the middle. I had to pull this slide out, complete with deeply suspect metal contacts and - oh lovely - an anti-theft thingy. Normally, if these are not de-activated by the checkout staff, the alarm goes off as you try to leave the store. I assume the stupid thing wasn't working, because I scanned all my shopping myself, and no staff member even saw the disc box. This thing should have set the alarms off in the exit from the store. It didn't. 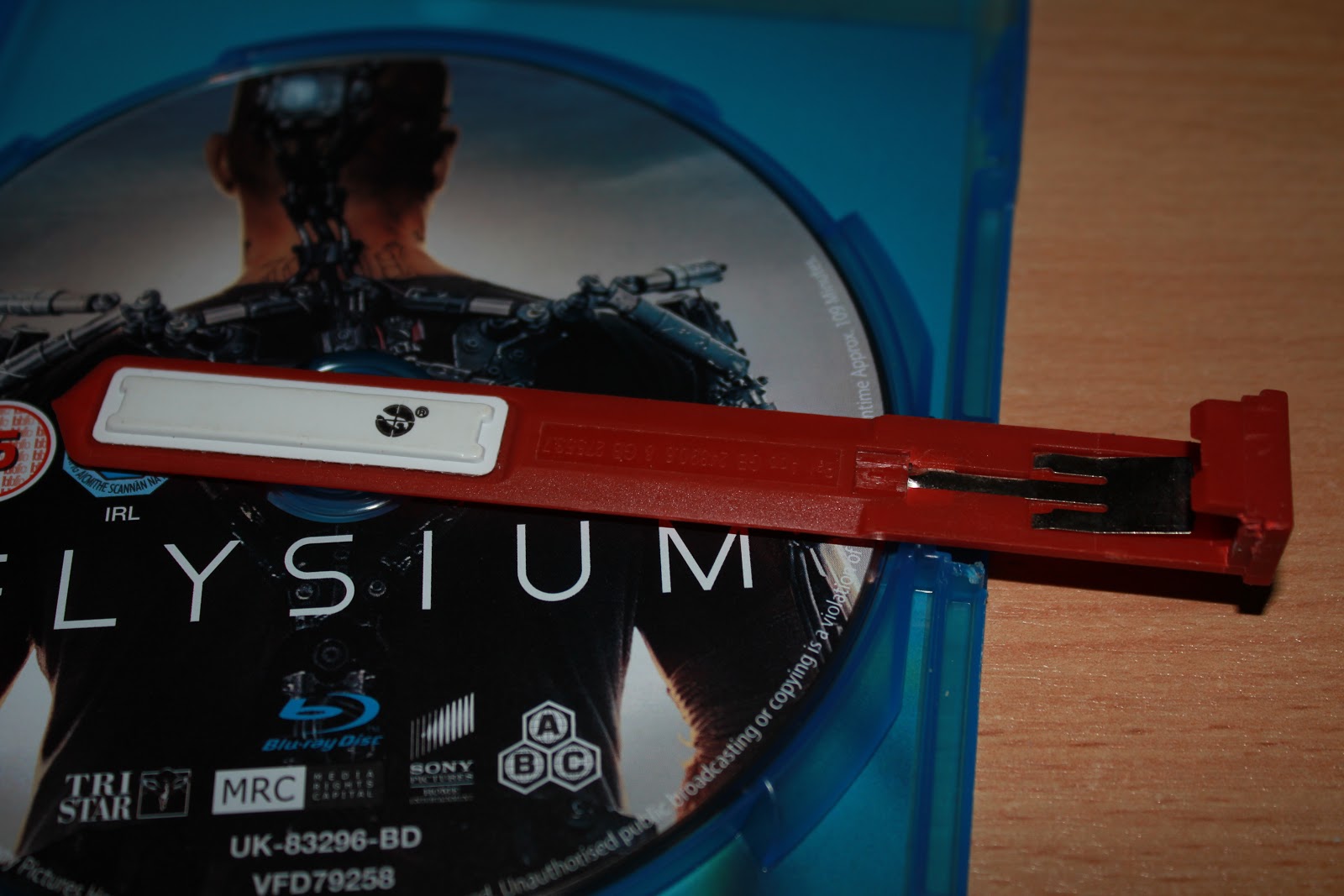 So, Sony. Why, Sony, is this stupid thing in my Blu-Ray box? Why do you feel it is necessary to make me break the box to play the disc?

This may seem like an unreasonable rant. It isn't. Sony, we must not forget, are the company who decided it was a jolly good idea to put virus software on music CDs that would be activated if you put the CD in your computer. Sony put root-kits on thousands of computers before anyone found out, which is quite frankly a psychotic thing to do.

I'm taking this box back to Tesco, to get one opened by them without breaking it. They can have this one back.

It was the security device, sure enough, but it didn't set the alarms going.