May 10th is the day Markos Vamvakaris was born, back in 1905. He was one of the first and finest Rebetiko musicians. 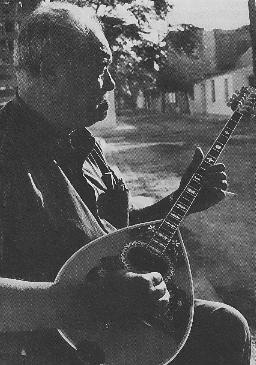 Markos Vamvakaris was born into a poor Catholic family on the island of Syros in 1905. His father played the greek bagpipes called Gaida and Markos would accompany him on a dog-skin drum. When Markos was eight years old he left school to work with his mother in a cotton thread factory, which he promptly ditched and started picking up odd jobs like newspaper boy, butchers assistant, eventually getting mixed up with the underworld of the streets. He ran away to Piraeus in 1917, supposedly thinking the police were after him for some piece of mischief. There, he worked in a series of gruelling, poorly paid jobs. This was tough, low-down work, but the nights were all about hashish and women.

He frequented the tekedes and by his early twenties had taught himself bouzouki and begun to write songs.  He was kept in fine clothes by an older whore and hung out at the tekes every night. In 1925, Markos heard Old Nikos play bouzouki and was immediately hooked. Six months later he was playing at a teke when Old Nikos stopped by, he couldn't believe it was the same kid who'd never even played a few months earlier. Nikos said they'd show Markos something in the morning and he'd come back and play it better than them in the evening.

Even after he began recording, around 1932, and had gained a measure of fame, he continued to work at the Athens slaughter house. His early songs dealt with drugs and underworld themes. He broadened both his lyric base and his appeal when censorship was imposed on the music industry in 1937, though his music always remained within the rebetiko idiom.

Because the bouzouki was considered a low-class instrument, it had not been recorded commercially until 1932 when Yiannis Halikias (aka Jack Gregory), a Greek-American, recorded his "Minore Tou Teke". The record was very popular, so Spiros Peristeris, who was working as a record producer, composer and instrumentalist for Odeon records in Greece, convinced Odeon to record Vamvakaris. In 1933, Peristeris supervised, and played guitar on Markos' first recording session (although he had recorded two songs in 1932 for Columbia, they were not released until later). Markos recorded one zeibekiko, O Dervises, and one Hassapiko, O Harmanes. Markos hadn't considered himself a singer but ended up doing the vocals on these records. They were very successful and Markos' rough and powerful singing became fashionable.

His popularity was sustained throughout the 1930's, despite growing political turmoil. The fascist Metaxas ordered the record companies to stop recording hashish songs and make rembetika respectable entertainment. This coupled with the new Greek passion for Italian cantades resulted in enormous changes in Greek rebetiko. And with that came the minor and major scales of piano, guitar and accordion none of which could play the quarter tones required by the old tradition. As a result the oriental flavour of rembetika started to disappear. Vamvakaris and his brother had a brief flurry in the late 1940's with the famous Kalamata group which included famous musicians like Papaioannou, Hadzichristou and Mitsakis.

Eventually the style of rebetika that Markos had pioneered became more mainstream, and by the 1940's Tsitsanis had started changing the subject matter to be about love and less about hashish, prison and other rebetika topics. Likewise, Hiotis started changing the sound of the music, adding two more strings to the bouzouki in 1956 (although he was not, as many claim, the first to do this) and moving towards a more flashy, electric and westernized sound. Markos continued to record in his older style through this period. He died in 1972.
Posted by Doctor Dark at 13:30