There's some pretty blatant nonsense around, thanks to various believers in Cameron's unelected government.

Here's the Dirty Digger's posh rag, saying what he tells it to say. 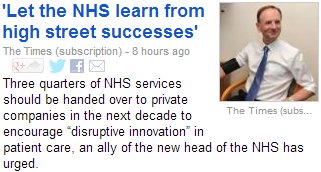 He thinks something we paid for, that we built up, with our taxes, for our benefit, should be handed over to private companies who have done nothing to deserve this incredible gift. Why? So that private companies can make money from providing a service we already provide for ourselves, which we do better than any other health service in the world. [1]

Frankly, I do not think the NHS has anything to learn from businesses in the high street, like Woolworths, Poundland, and other "successes". They already know how to do what they do, better than anybody else. 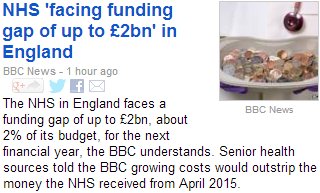 And this "funding gap" isn't going to happen if the government doesn't keep on clawing back unspent money. The translation of "the BBC understands" is, of course, "the BBC has been told by its Tory owners to say this". This is just contemptible propaganda, and the old BBC would have spiked the trashy story.

[1] British healthcare rated top out of 11 western countries, with US coming last

Just so you know, I delete comments that are from obvious Tory plants.
Posted by Doctor Dark at 10:36