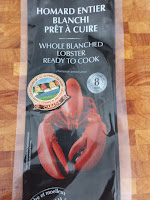 Yes, I know. Much too silly. I mean lobster thermidor, which is named after the month of Thermidor in the new calendar of the French revolution. It's a dish I've eaten in Greek restaurants, and it truly is among the foods of the gods. Tavernas don't have it, as it's much too posh for them.

I happened to spot two frozen lobsters in our local Tesco, marked down from £8 each to £4 each, and pounced on them straight away. Obviously, I needed a recipe, and I found one on the BBC food site. Here it is. 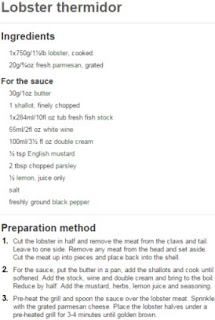 The recipe starts with lobster that is already cooked, but these ones had only been blanched, which apparently separates the flesh from the shell. 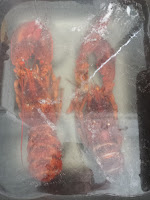 They were supposed to take twelve hours to defrost in the fridge, but that wasn't anywhere near long enough, and I eventually ended up defrosting them completely in cold water. 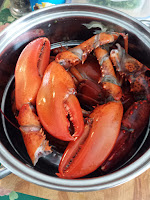 There were two possible ways to cook them, boiling or steaming. Boiling would have required a big pan full of boiling water, so I steamed them instead - much more energy efficient - and that took eight minutes. The claws fell off when I took the lobsters out of the cold water, but it made them much easier to fit into the steamer.

Being a moderately efficient cook, some of the time, I started the sauce while the lobsters were steaming. I also put the oven on to heat up. The grill here is useless. If you have a decent grill (or a broiler, if you are to the left of the Atlantic Ocean) use that, it's what the recipe says. 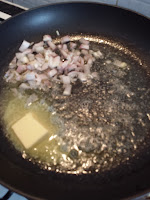 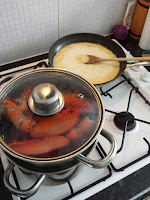 To the left, you can see a couple of chopped shallots cooking in butter. By the time the picture on the right was taken, I had added the fish stock, wine, and cream to the sauce, and boiled it fairly hard to reduce it until it was fairly thick.

At that point, I added the mustard, chopped parsley, and lemon juice, and a quick grind of black pepper. 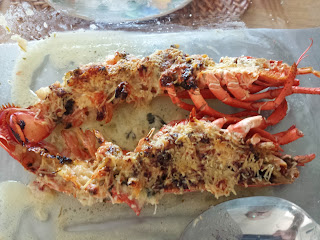 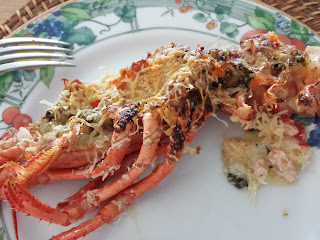 The next major operation was cutting the freshly steamed lobsters in half, which was easier than I had thought it would be. Perhaps the steaming softens the shells? The only difficulty at this point is that the lobsters are too hot to hold easily. Scoop out as much lobster meat as you can, remove the meat from the claws, chop it all up, put it back into the lobsters, and pour the sauce over it. Add the grated parmesan, and grill or bake until they look done. This one looks done!

It tasted pretty much as it should have done. We enjoyed it.

The only real problem was quantity. There really isn't much meat in a lobster of that size, sadly, even when you get the meat from the claws. 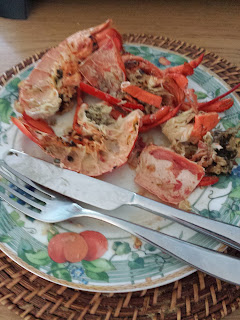 In fact, all too soon, this was all that was left!

The frozen lobsters are only just good value when they are marked down to half price. If I'd paid the full £8 for each, I would have been pretty annoyed with them.

Still, there is a lot of lobster flavour on that plate, so I put all the remains in a stock pot, and boiled them up for an hour or two. I broke all the shell pieces up, so I got all the goodness from the legs and other tricky bits. After straining the results, I had a stock with an astounding flavour of lobster. It made a fish soup that I really enjoyed.

I'm thinking of making a different Thermidor dish, using a large bag or two of prawns, with the sauce and cheese poured over them. It won't have all the flavour of lobster, but it should be pretty close...

Attempting to format this post was a nightmare. Blogger's editor is a royal pain to use. Any suggestions for a free substitute that can actually do WYSIWYG?