Cthulhu in the kitchen... 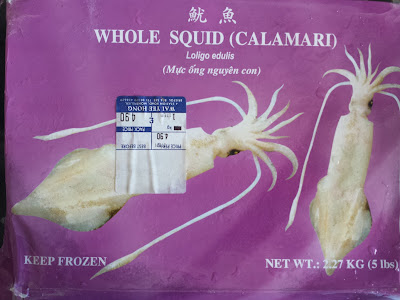 You know how it is, when you are about to move house, and you don't want to move anything unnecessary to your existence in the new place?

Yesterday, I found we still owned a large box of frozen calamari. I really don't remember when I bought this. That label shows the old address of Wai Yee Hong, before they moved to their magnificent new building, so it has to be quite old. £4.90 for that amount of squid must have seemed a tremendous bargain, at the time. Maybe I thought I'd be able to separate a few at a time, or something? 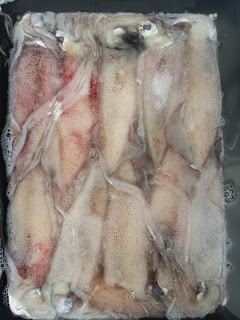 It was obvious it would have to go, but I was, perhaps not surprisingly,  unable to find any recipes that had five pounds of squid in them. There was no way I was just going to throw it away; I'm far too stubborn, not to mention mean.

Anyway, I set about defrosting the little beasties in a bowl of cold water, and after a while, I was able to start easing squids off the edge of the block, and cleaning them. Yes, they had been frozen just as they were, when caught, and many of them were holding tentacles with each other, as well. 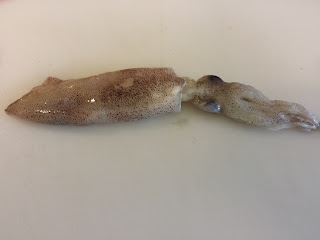 Here's the first attractive little beauty I was able to persuade to separate from the group. The bits you want are the tentacles and the body, without the eyes, guts, and the thing it has instead of a backbone, called the quill. Cut the tentacles off, fairly close to the eyes. The mouth parts are in between the tentacles, and should be removed, a fact I forgot. They aren't harmful, or anything, but nobody seems to like the idea of leaving them in place. The larger ones have crunchy beak-like parts you might not enjoy eating. 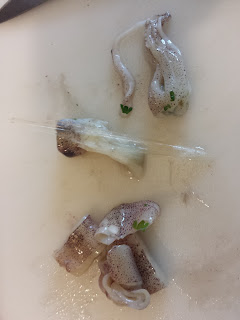 Here's the same little fellow, after I attacked him. You grab the remains of the head in one hand, and the body in the other, and pull. You should just about be able to see the translucent quill, there in the middle. That comes out quite easily, once you can loosen the end of it. And at the bottom, I have cut the body bag into a few rings and a triangular bit.

So, that was the first one done ... I decided to count how many I had, but lost count somewhere after twenty ... 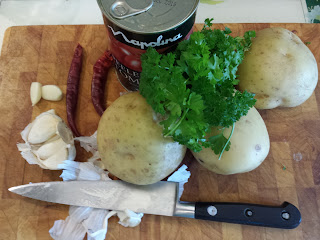 It was time to look for recipes. I found an Italian one, for a squid and potato stew, on The Telegraph's web site. It required a respectable amount of garlic, so I chose it. There's a fancy Rick Stein one online, as well, but I didn't have all the numerous ingredients he thinks should go in there. 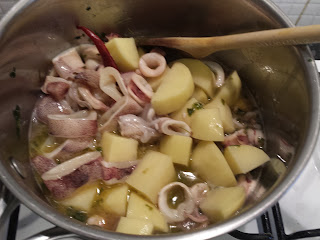 Once you get going, the stew looks like this. 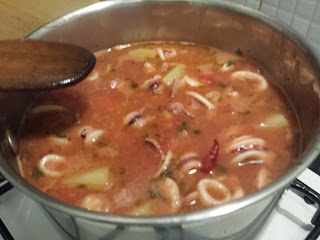 After the tomatoes have gone in, it looks like this. After it has been cooked for an hour, the potatoes soften and thicken the stew, and the garlic becomes mild enough for the amount of it to be less terrifying. In fact it's delicious, and very good comfort food.

In the next post, I tell you how I used the remaining three quarters of the squid.

Hmm. Never had any squid I'm afraid. But this does look delicious. I might go for it one of these days. Provided I can find a decent enough batch that won't taste like cooked rubber.
(as I've been told it does)

Apparently, there are two ways to cook squid that will not remind you of cooked rubber. One is very fast so it doesn't have time to get tough; this is the way Greeks, the Spanish and Italians usually serve it. The other is to stew it for about an hour, until it gets tender.

Well. I'd better try it. Life is about obtaining experiences after all. I think I'll try cooking it your way. The proven approach is usually a good place to start.