I've decided to make a loaf of 100% rye sourdough bread. I love the flavour of rye when it's part of a loaf, and besides, I think "pastrami on rye" sounds like a fine thing to eat. I'll try it with supermarket pastrami first, and make my own pastrami later... 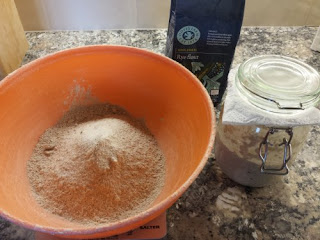 The recipe is from James Morton's splendid book, "Brilliant Bread", which I have been using with enthusiasm, and varying degrees of success, since it came out. It starts with 400g of rye flour. I'm using Dove's Farm stoneground organic rye, which I bought in Tesco. If you can't find that make, find something suitably similar. The plastic bowl I use looks tatty, I admit. I realised the other day that I've been using it for over 35 years. I probably ought to get a new one. Also in the bowl, but difficult to see, are 10g of salt. I'm a bit surprised by the amount of salt in James's recipes, as he's a doctor, and I thought salt was one of the things that gives me high blood pressure. Normally, I halve the amount of salt in his recipes, but for this one, I'm trying to reduce the number of things that can go wrong! 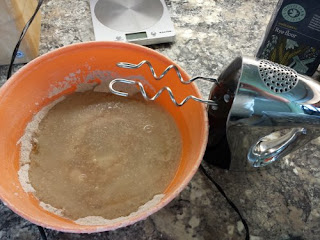 The next ingredients are 200g of rye sourdough starter, which you can see waiting in the jar, in the first picture, 40g of runny honey, and 300g of water. I'm using Greek honey, and Welsh water. Rye has very little gluten in it, which is why making bread from it is such a challenge. As a result, this dough has to be kneaded a lot, if the gluten is to develop properly. I used my little hand mixer for a full fifteen minutes, and followed that with a couple of minutes of stretching the dough with a scraper. 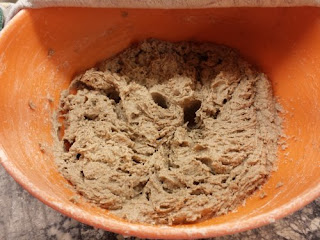 It looks reasonable, I think, but it's visibly different from the stretchy dough that would result with wheat flour. At this point in the recipe, there are two choices. I can rest the dough for six hours at room temperature, and then continue with the bake, which looks as if it needs at least another six or seven hours, or I can rest it for three hours and then put it in the fridge overnight. The fridge wins.