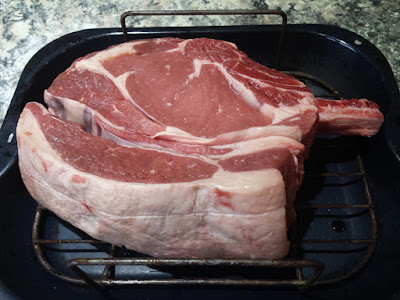 This fine thing is the piece of beef I bought to use during the Christmas holiday, but ended up freezing because there was so much other food we were in danger of bursting.
You may notice the silly bit of elastic that was holding it together has broken. I replaced that with two proper bits of butchers' string before it went in the oven. 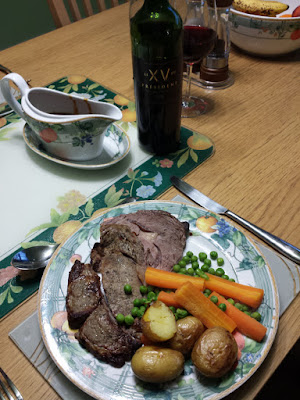 Almost there! The wine's poured, and the real gravy is ready. This meal was a joint effort, as my lovely wife makes splendid Yorkshire Puddings, while I have no idea how to do them. There are quite a few things like that, but I think I'll carry on pretending there aren't.... 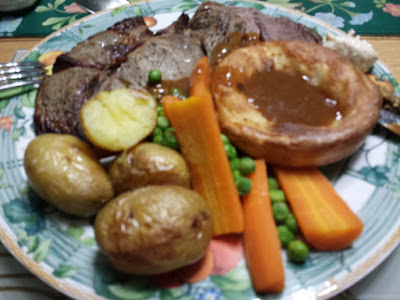 And I apologise for this shot being out of focus. I was hungry, and wanted to start eating. Yorkshire Pudding with gravy has arrived, all is right with the world. 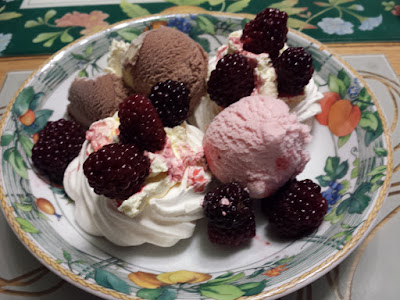 Yes, we actually had a dessert! This has meringue, ice cream, whipped cream and blackberries, so we decided it was a deconstructed [1] Eton Mess.

[1] I'm pretty certain that we can't be the only ones to be annoyed immensely by the way cooks/chefs on the television spread the elements of something like, say, a meat pie around the plate, and announce proudly that they have deconstructed a meat pie. No, you pretentious idiots. You have failed to make a meat pie, and served some stew with a lump of pastry nearby.
Posted by Doctor Dark at 10:46