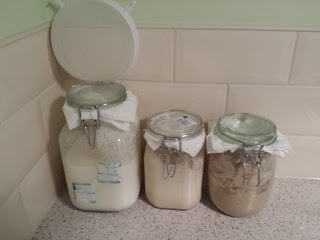 The recent post about a day in the life of a foodie was woefully incomplete. I totally forgot to mention some of the things that get done pretty much every day. The jar on the left, in this picture, is the one I make kefir in. For authenticity, I should be using a goatskin, of course. And it should hang in the doorway, so that anyone passing it can shake it, for luck. That, so I have read, is very much a thing, in Mongolia, or wherever kefir started out. But I'm so lacking in authenticity that I'm not even using mare's milk. It's hard to picture the Mongol hordes charging towards your defences mounted on cattle. Anyway, each day, the kefir is strained, and the liquid part goes into the fridge. The disturbing lumps, refered to in most kefir literature (yes, that too is a thing) as kefir grains are given more milk to work on.
In the other two jars, I have sourdough starters, one plain, and one rye. The hardest part of keeping sourdough starters is getting used to the amount you have to throw away. You see, the micro-organisms in the starters excrete waste products; if you just add flour and water, these waste products build up. Chucking half of the starter away before you feed it means half the waste products are removed, and the remaining little chaps get to work in a cleaner environment. Anyway, on to Π... 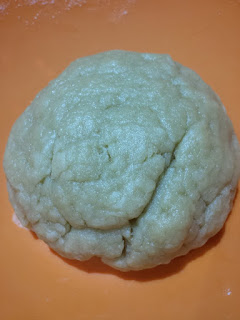 This blob is the strange pastry that the pie will be made in. It's hot water crust, and contains a disturbing amount of lard. I studied a couple of recipes, before making it. The one in Leith's "How to Cook" uses butter and lard, but it's a recipe for a proper raised pie. I made mine in a tin, as the extra challenge of building a self-supporting pie case seemed a little risky for a first attempt. I was following in the doughty footsteps of Tim Hayward, whose "Food DIY" has inspired so much of what I have been writing here. 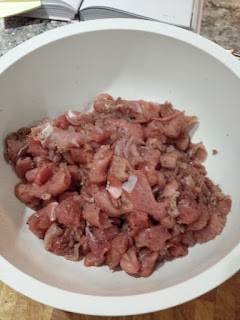 Although this is from the recipe for a Gala Pie, I'm just using the meat, and not adding the boiled eggs. What we see here is chopped pork, with the addition of some shop bought, unsmoked bacon, for its preservatives. Harder to see are the salt and the spices. I've resisted the inclination to reduce the amount of salt, as it also has a preservative effect. Tastes good, too. 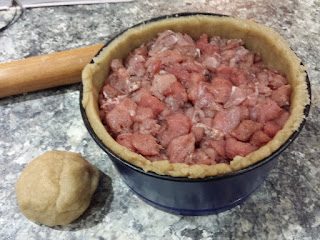 So, a third of the pastry is waiting to become the lid of the pie. I've lined the tin with the rolled out three quarters of it, and done my best to make sure there are no cracks. In goes the meat, and at this point, I'm wondering how Mr Hayward managed to get four boiled eggs in his pie as well as 1200g of meat.

On with the lid, glaze it with a bit of beaten egg, make a hole in the lid, and bake the pie at 180°C for an hour and a half. Because I'm still learning how to use this oven, a check of the internal temperature seemed like a good plan. Yes, pork is certainly cooked if it gets to 75°C, so the next move is to take it out of the tin, give the top and sides some more egg wash, and bake it for another ten minutes.
Once that's done, the pie has to cool completely, before having its internal spaces filled with jelly. [Note to Americans, this does not mean jam.] The jelly seems to me to be a little soft, so I'm reducing it a bit before using it, to make sure it sets hard. More soon...