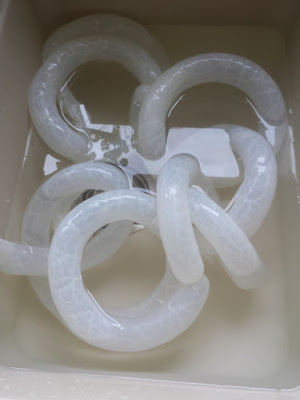 It's that picture of sausage casings that I posted a couple of days ago, all over again!

I had intended to write this much sooner, but there was a pause while I sorted out a fairly major computer problem. I may have created all sorts of new problems by doing that, of course, but they have not happened yet...

There are quite a few Merguez sausage recipes online, and the usual misery-guts commenters asking why on earth would you bother, as you can buy cheap ones in shops? If that is the sort of thing you think, you are reading the wrong pages.


When home made food is done properly, it is better than the factory stuff. Take, for example, sausages. I just looked at a pack of quite good commercial ones. As well as meat, 85%, they contain calcium carbonate (chalk), brown sugar, sodium metabisulphite, and a few other mysterious things. Mine contain meat, herbs and spices. /rant 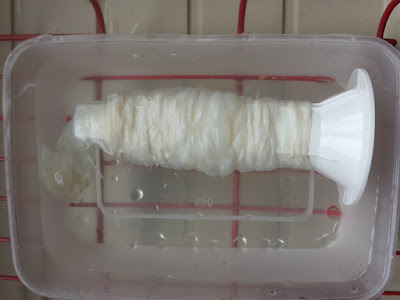 This is the larger size of sausage stuffer for our mincer, with some nicely soaked hog casing threaded on it. Merguez is often made with the smaller sheep casings, but I don't currently have any of those. 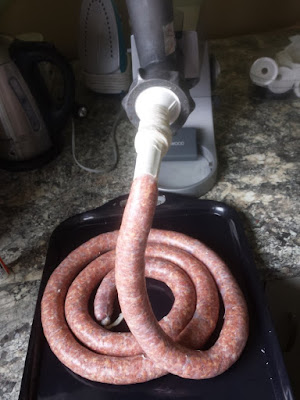 Having mixed the minced Welsh lamb breast and shoulder with a good amount of my home made harissa paste, and some salt, I've started stuffing. I'm glad to say that I seem to be getting back into the way of doing this, as there are hardly any air spaces in this one. Bacteria can breed in the spaces, you see. 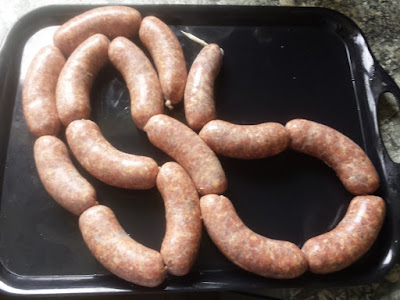 It always amazes me how strong the casings are, when I twist them into links like this. Beautiful little things, aren't they? I believe I will have a couple for tea tonight. 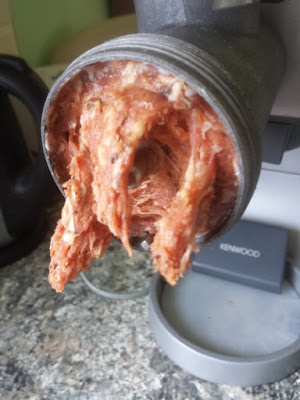 This, however, is annoying. There's always some of the meat left in the mincer that will not emerge because it has passed the end of the spiral thing that moves it along. Having thought about this, I think I can solve it next time, by putting something like stale bread through the mincer to push it out.

In the meantime, though, the solution is simple enough. One simply makes the remaining meat into a patty, and fries it. This is as good a way as any of finding out how the sausages are going to taste. 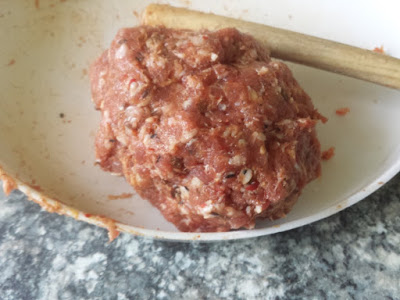 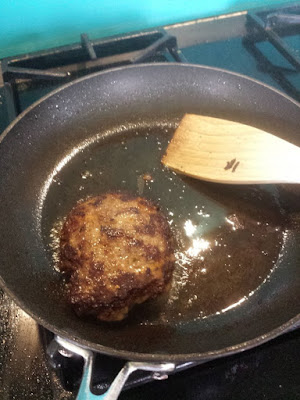