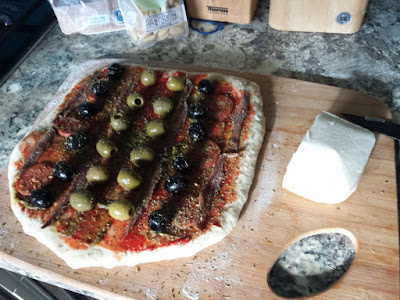 It was indeed time for some pizza. I made the dough rise faster than usual, by using a tad more dried yeast. On the left, you can see half of it, with tomato paste, pesto, anchovies, chorizo, and green and black olives. The mozarella is waiting patiently at the side. 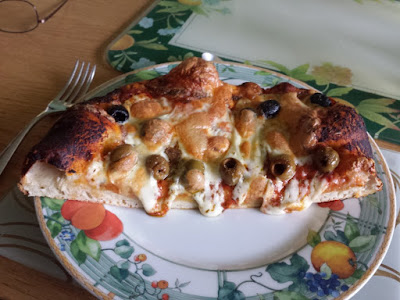 Confession time. The dough recipe was for three or even four pizzas. Failing to read the recipe properly, I used half of it. So, it was natural I would be surprised by how much the dough had risen in its twelve minutes in the oven, on top of a hot stone.

This was my half, and I managed to eat almost all of it. I like the way the hot stone bakes the dough so evenly; there's no sign of the soggy middle that can happen. In the next post, a dessert!