Italian Sausages and Polenta with a Chilli Tomato Sauce 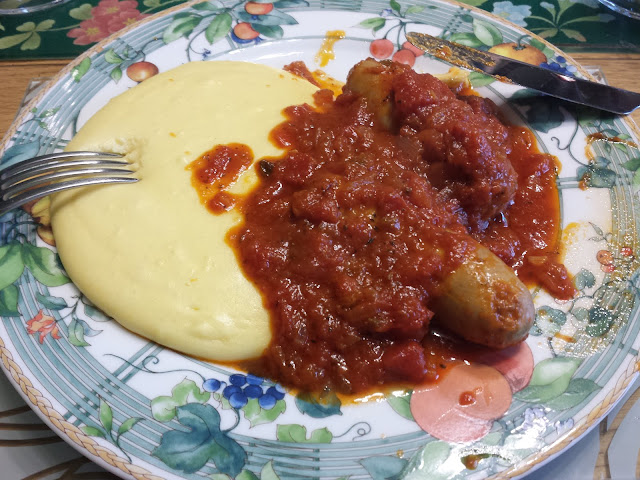 Well, we had no Italian Sausages, so I took some Tesco 97% pork sausages, and attempted to shorten the links by twisting them, so they were about the same length as the ones in Nigella's book. They're supposed to be fried in chilli oil for five minutes, to darken the skins, which was fun. Watching them untwist themselves back into normal links was fascinating.

As well as the Italian sausages, I didn't have two jars of "high end" ready made tomato and chilli sauce. Some red onion, olive oil, two tins of chopped tomatoes, and some chilli sauce sorted that out. Another thing that wasn't in the larder was Marsala. Cheap Spanish red wine and brown sugar went in instead.

Polenta. I chose not to use the "instant" ready made stuff, which had to be cooked for 15 minutes, and made it myself, which involved stirring more or less continuously for 45 minutes, and dodging the lumps of molten lava that were thrown out of the pan when the huge bubbles burst.

I think I'll make normal bangers and mash, next time, with ketchup...
Posted by Doctor Dark at 09:03