Smoked Mackerel, Food of the Gods.

I've been meaning to try smoking food for a long time, and finally got round to it. The inspiration for this little project came from Tim Hayward's book, "Food DIY", as so many of these fun things I do have. 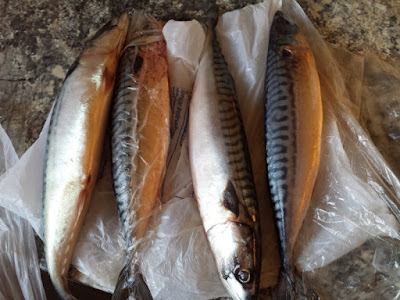 I bought these four nice mackerel from Mr Tesco for the princely sum of £6.16 for 1.76Kg.

I didn't get the lass on the counter to gut them, or fillet them, because I feel good about being able to do grown-up stuff like that myself. 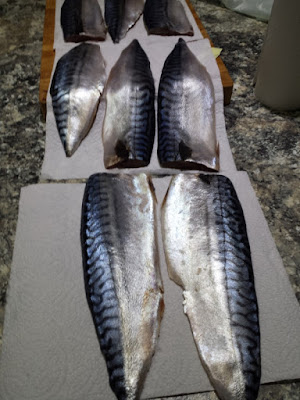 I removed the guts for disposal, and then cut off the heads, and filleted them. I would normally not waste the tasty heads and the bones, along with the flesh remaining on them, but instead of making fish stock, or even a Singapore fish head curry, I wanted to concentrate on learning the smoking procedures.

Here are the fillets. They are rather pretty this way up, and you don't get to see some of my rougher knife work this way. I salted them for about half an hour, but forgot to take any pictures of that.

I've been accumulating the things I would need for this job for quite a while now, including three bags of wood for smoking. I decided to go for a nice, robust oak smoking this time. The bags of wood came from somebody on eBay, I think. 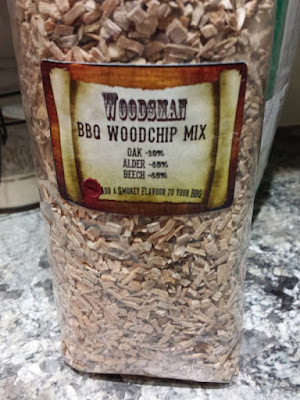 These days, eBay is one of the first places I look when I want to buy something for these games.

It's where I got the rather fine bin in the next picture, which is made out of steel, treated by galvanising it. Because of that, it has no paint on it, an important point when choosing something to put on top of the gas hob. It would probably work fine on an electric hob, as long as it was in contact with the heat.

As for those ceramic induction hobs they fit in "designer" homes, I have no idea whether this would work, or the dustbin would levitate and explode.

I like to cook with gas because I can control it quickly. This matters when you are in the habit of cooking experimentally. Or just mentally... 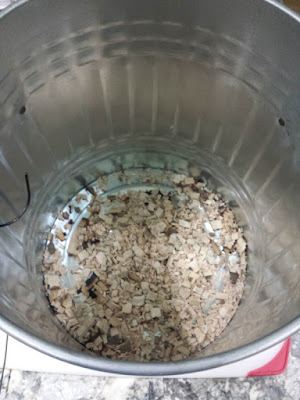 Flinging some wood in the bin, I set to work to hang the mackerel fillets up, in a similar way to the illustration in "Food DIY". Instead of the skewer he used, which would have needed holes in the bin, I made a cunningly shaped hanging wire from a metal clothes hanger. You know, the sort that used to be on inner city Ford Escorts as radio aerials, after yobs had snapped the proper ones off.

By this point, things were obviously going far too well.

The fillets, hanging on the wire, looked lovely, and were all ready for some hot, smoky action. 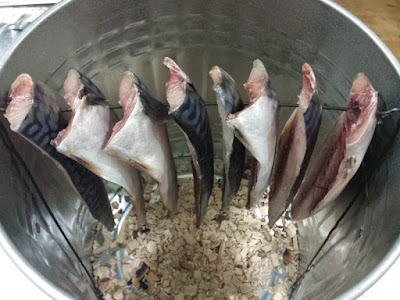 I considered turning the kitchen smoke alarm off, in case the dustbin lid let out too much smoke, but decided instead to turn the cooker hood up to level three, the one that makes a noise like a jumbo jet. I took the metal grills off the bottom of the extractor, in an attempt to get maximum airflow.

I shouldn't have done that, as I saw they needed cleaning, a job I did when I finished the real fun stuff. 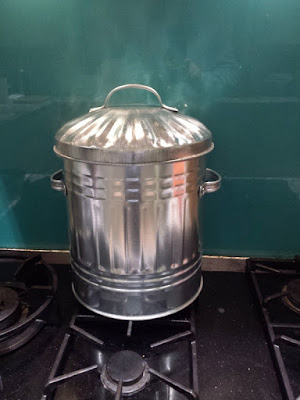 It was time. I lit the gas, and watched anxiously. Quite soon, smoke began to trickle out from under the lid, and it smelled rather amazing. I was rather glad the smoke detector kept quiet, until I thought that I would want to test it later because of that.

I gave it about fifteen minutes of heat, and stopped. There was a fair bit of smoky condensation around the edge of the lid, and it turned out to be more than there would have been if the fish had behaved themselves, and stayed on the wire.

Three of them had broken, and fallen down into the bottom of the bin. I don't know if salting them for longer would have toughened them up enough to stay on the wire. I've decided to get some wire racks to go in the bin, so this will not happen again. 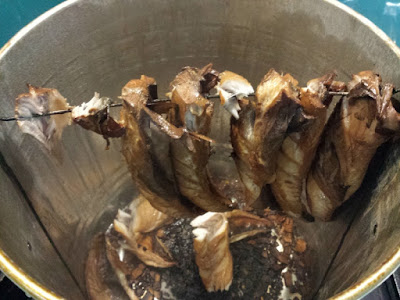 As you can see, most of the wood has given up its smoke, without bursting into flames, and the fish is cooked. It looked and smelled fine, and I retrieved the fallen bits as well. 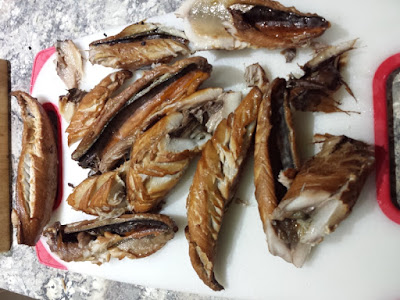 The weight of the smoked fish produced, apart from the delicious bits that accidentally fell in my mouth, was 768g. Tesco sells smoked mackerel for £1 for a hundred grams, so not only have I produced something wonderful, but i have made a small saving in money terms!

Here are the bits I didn't taste. I've frozen half, and kept the rest in the fridge. Breakfast will be nice...