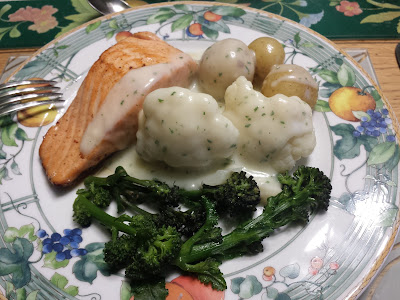 This is fish the first way, a salmon fillet with no bones in it, served with some new potatoes, cauliflower, home grown broccoli, and parsley sauce from a packet. It was very pleasant with a white wine to help it on its way. My wife liked it, and there were no bones in the fish to annoy her. 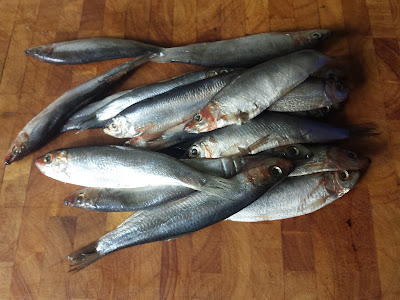 These little beauties are sprats, and they are so cheap that I allow myself a big handful as a treat, when my wife is away. Treat? These cost less than a pound. 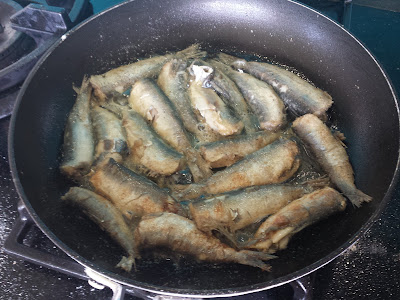 I was asked to make these postings more instructional. So, off with their heads, use the pointy end of the knife to gut them, and shake them in a bowl with a little seasoned flour, until they are covered thinly with it. Heat a pan with some olive oil in it, and put the fish in. The lass in the shop, that sold them to me said she had stirred hers, and they broke up. No surprise, poor little things. After a couple of minutes, turn them over and give the other side a couple of minutes. 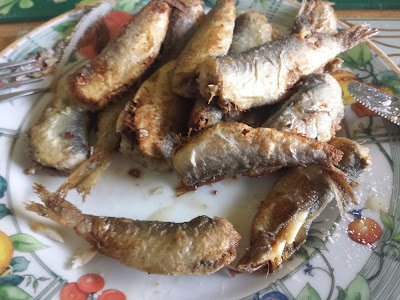 This is the result. I got a bit excited, and ate one before I took this picture. The flesh comes off the bones very easily, but it's a good idea to have bread and butter handy, to eat with any bones you might happen to put in your mouth. They won't last five minutes in stomach acid, so it doesn't matter if you eat some. 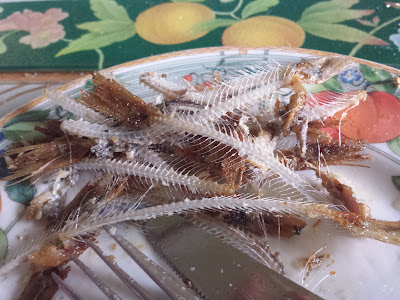 Then again, if you don't, you will have something like this left. Obviously, they go in your compost bin, and will make things grow well in your garden....

Bon appetite, as we say here in Wales!