We went on holiday for a fortnight in Crete, this year. As ever, I loved the food, and brought back a recipe book. It's not without its problems. I keep meaning to finish a scathing article on the many things recipe books get wrong, but don't hold your breath for me to get that done!

Loukanika are also called village sausages, and the authentic ones in tavernas vary a lot from place to place. I tried to make some before, using a recipe that involved lots of orange zest and paprika, but wasn't really convinced they were anything like the Greek ones we had eaten. 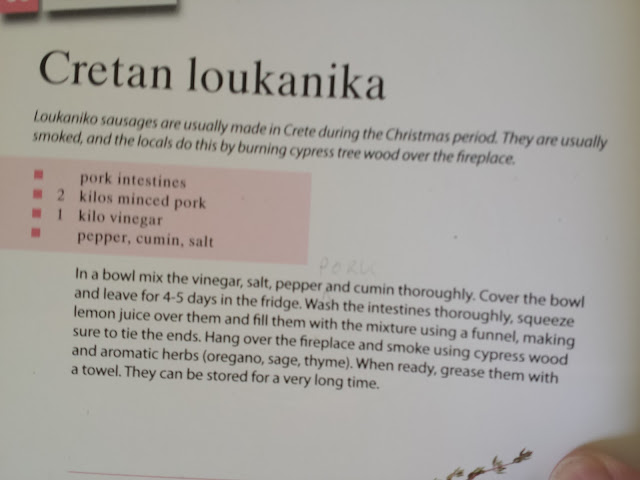 Here's a good example of a problematic recipe! For a start, there's no clue as to how much pepper, cumin, and salt to use. And the method completely forgets to put the pork in... But we can cope with minor problems like that! 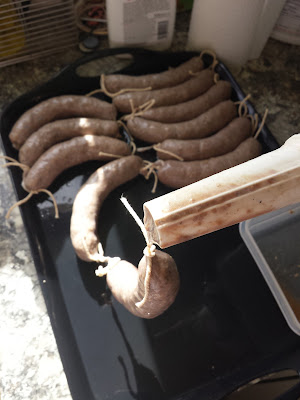 I had 1400g of pork shoulder, and ran it through the mincer. They may have meant the sort of malt vinegar that gets put on chips, for all I know, but I made a mixture of red wine vinegar, sherry vinegar, and a splash of balsamic. I used 700g of it, and I can tell you now, that turns out to be about twice as much as is actually necessary. As the vinegar seemed to be intended to cure the meat, I only used 30g of salt. Using the cooking skill known as guesswork, I ground up 20g of black pepper corns, and added 50g of dried cumin. It smelled about right, I felt.
Into the fridge it went, for six days, during which I obtained about forty yards of pig casings, from a UK company called Breck Casings. If you are not in the UK, you should be able to find a supplier easily enough with Google.


When it came to time to stuff the casings, it was obvious the mixture was far too wet, and I used a sieve to attempt to dry it out a bit. Even then, it was a struggle, with vinegar dripping from various parts of the mincer as I worked. 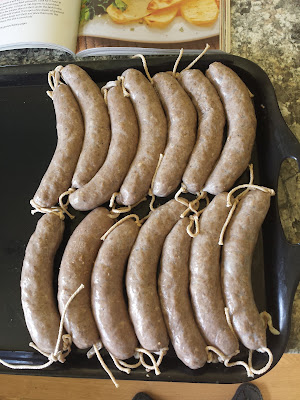 Still, the resulting fourteen sausages looked reasonable. They are tied with butchers' string like that so that they would hang easily over the wire at the top of my large smoking dustbin. You might not be able to see it, but most of the sausages are linked together by unfilled bits of casing. 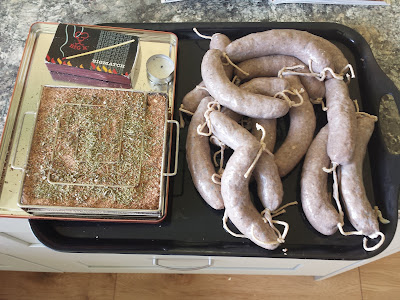 We had no cedar wood sawdust, and there was no obvious online source that wasn't asking for absurd amounts of money, so I used oak. You can see I added some herbs, as the recipe suggests, thyme, sage and some very nice Lesbian oregano. The smoker, in case you are wondering, is called a Pro-Q, and it does a very good job. 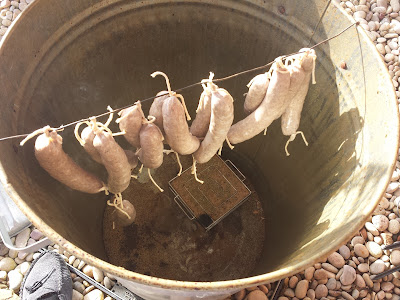 Here are the sausages, hung up in the smoker (galvanised dustbin) yesterday evening, with the smoke just starting. A few hours later, vinegar dripped on the sawdust and put it out.

I've reloaded the Pro-Q and lit it up again, with the bin tilted so that any further drips miss the sawdust. Once they are smoked, I will be able to report on whether they are more authentic than the previous batch.
Posted by Doctor Dark at 16:48

They were pretty good, but more spice and a lot less vinegar would have been better.