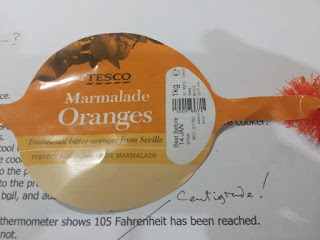 Marmalade.
I was never all that happy with the previous batch of marmalade I made in 2014. I thought it had been boiled too much, as it was quite a dark colour, and recently, I noticed that what I thought was the last jar was getting quite low.* There are only a couple of weeks of the year when the right oranges for marmalade making are in the shops, and last week I found some in Tesco. I grabbed the last Kilo.


In case you don't know, proper marmalade is made with Seville oranges, named after the part of Spain where they are grown. These oranges are a bitter variety, full of pips. You wouldn't want to eat them, or drink the juice. If you use ordinary oranges, you will end up with some sort of orange jam, that may well be very pleasant, but it won't be marmalade. 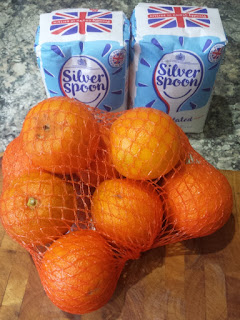 If you are not near enough to Spain to have them in the shops, and want to make marmalade, look for something too bitter to enjoy, with unbelievable numbers of pips. The pips are more important than you might think, as they are full of the pectin that makes the marmalade set.

As well as a Kilo of oranges, you will need two Kilos of granulated sugar, and two lemons. I don't know why Tesco is only stocking foreign sugar, but local shops like Spar and the Co-op do have British sugar, made from beet. [It may have something to do with a certain government minister who used to be high up in that foreign sugar company.] The method. You will need a pressure cooker for this recipe. There are other recipes involving boiling things for hours, and I'm sure they work pretty much as well as this one does, but we have a pressure cooker, and it saves quite a lot of time. Cut the oranges in half, squeeze them with one of those glass juice squeezing things, which I completely forgot to take a picture of. Put the juice, and the peels in the pressure cooker. Add the juice of two lemons, but not their peels. The lemon pips can go in with the orange pips. 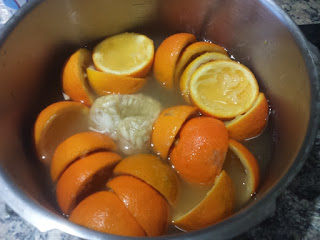 I used a plastic strainer to stop the pips going in. There tend to be pips still hiding in the peels, but that can be sorted out at a later stage. The pips get wrapped in a nice open weave cloth, such as cheese-cloth, muslin, or whatever you have handy that seems reasonable to use in cooking. Now add 500 ml of water. The picture on the left is the contents of the pressure cooker before boiling. 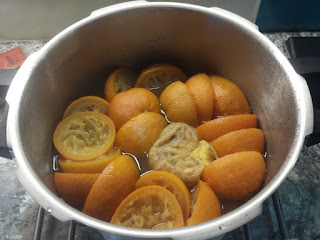 And here's a picture of the contents of the pressure cooker after ten minutes of boiling at full pressure, followed by allowing them to cool naturally to room temperature. Notice that the pith of the oranges is cooked, and very much softer than before.


Transfer the juices to your preserving pan. It's nice if you have a big copper plated pan for this, but we use a big old Teflon saucepan. Hooked onto the side, is our old sugar thermometer. 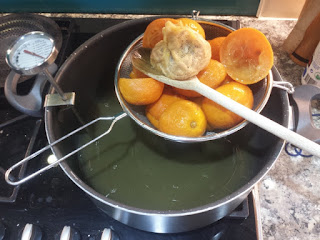 Now you need to squeeze the pips into the pan, until they... no, just squeeze them until you don't think you will get any more out of them. Squeezing pips until they squeak turns out to be really difficult. Only politicians can do it.

Throw the bag of pips away once you have got as much as you can from it. The pips supply pectin, which is what makes the marmalade set nicely. 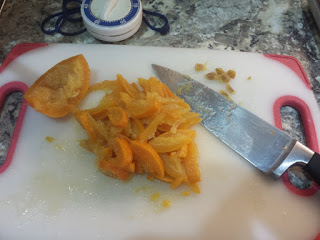 Now, chop up the peels to your preferred size chunks. Some people like very fine pieces of peel, while I quite like big chunks. I've cut these ones to a medium size, as my wife prefers them small. Notice that this is when you remove the pips that have been cunningly hiding in the peels. 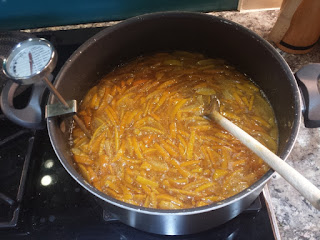 Put the chopped up peels in the pan with the juice, and bring them to the boil. 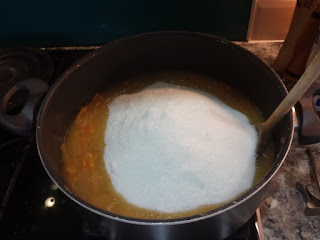 Tip in the two Kilograms of sugar, and stir until it is properly dissolved. Keep heating, and keep stirring. You need to raise the temperature to 105°C.

Warning! Hot, concentrated sugar solution holds much more heat than mere boiling water, and if you splash this on yourself it will burn you badly. 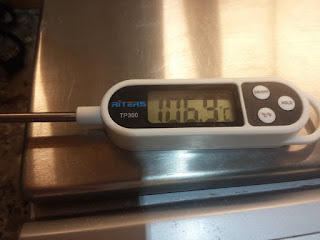 That old sugar thermometer is no longer doing its job properly! It was showing something a bit below 105°C, but I thought the marmalade was looking ready, so I checked it with a cheap electronic thermometer, and as you can see, the marmalade was done! If I had heated it until the old thermometer said it was done, I would have had another batch of over-boiled marmalade.

There are all sorts of ways to test whether your marmalade is going to set, including cold saucers in the fridge, with a splash of marmalade on, but I don't think this recipe can avoid setting, if you follow it properly, and make sure you get it to the magic 105°C.

All that remains to do is put it in clean jars. Dishwashers are the best way to clean jam jars. If you don't have one, you'll have to boil them up in some suitable manner. Below, you see my results. It's very much better looking, and tasting, than the previous batch. 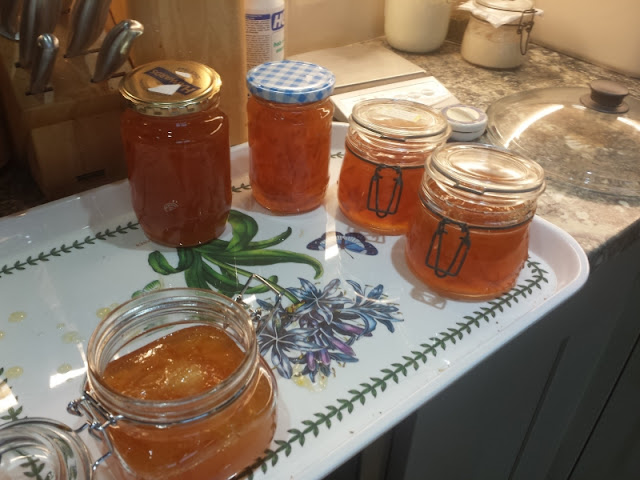 * I found another jar of the old, dark stuff. I threw the contents away.