A leaflet from "the EFDD Group in the European Parliament" was delivered here yesterday, and I suspect a lot of other people will have had a copy. Many will have been recycled, and quite a lot will have been enjoyed by the sort of people that believe Farage's lies.

Make no mistake. It's a pack of lies.

Allegedly, we need to "respect a free and fair national referendum". 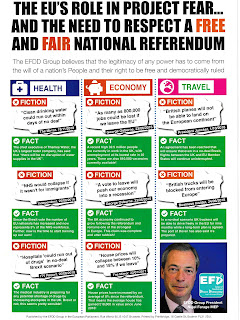 The leaflet talks about "Project Fear", and as usual, these people pretend that Project Fear was something the Remain camp used to get support.


It was not. The Leave groups made it up. Whenever somebody pointed out that Brexit would inevitably lead to a particular bad result, they just claimed it was Project Fear, without bothering to provide any argument or evidence against the bad result of Brexit. And the news media never challenged them on that. 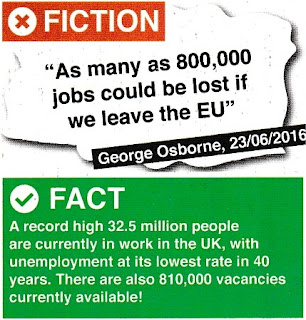 George Osborne underestimated the number of jobs that would be lost, as you can easily tell, from the fact that that number has long since been overtaken, and we haven't even left yet.

The record high figure is, of course, a figment of the Tory government's increasingly bizarre ways of counting the number of people in work - somebody who gets paid to do an hour a week is counted as having a job. Anyone using the figure is at least as dishonest as the Tories.

The claimed number of vacancies, which is so conveniently just a little bigger than Mr Osborne's 800 thousand, is presumably derived from the number of farm labourers who haven't come here, and the number of EU nurses who have left, or some other such imaginative way of making up a number. 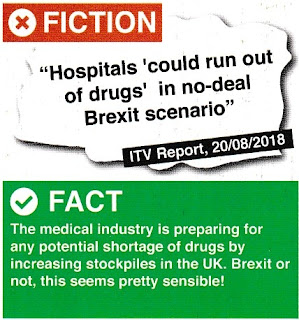 Anyone with a prescription for Venlafaxine will know that shortages of drugs are already happening, even before we have left, even before the "just walk away" no deal scenario the Brexit fanatics now claim everyone knew they were voting for.

The worst part of this lie is that things like insulin cannot be stockpiled, because they have a limited shelf life. What seems "pretty sensible" to these liars is something that isn't even possible. 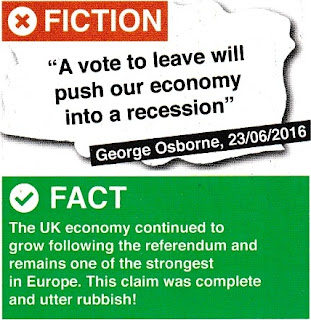 Quite a clever lie, this one! Yes, the economy has indeed continued to grow, but the amount it grows by keeps decreasing, so that it is currently hardly growing at all. At the current rate of change, we will very soon be into the actual recession that was predicted.

As for remaining one of the strongest economies, the truth is that we have slipped down a couple of places in the list...

Whether you like Mr Osborne, or not, what he said was not "complete and utter rubbish".

Infinity and beyond, of course. Lies are all the Leave lot have, after all. Whether it's Alexander Boris de Pfeffel Johnson, with his £350 million a week (which wasn't the true amount) being saved and spent on the NHS (it won't be), or yet more of Nigel Farage's lies, the lies go on and on...

Analysing the rest of the lies in the leaflet would take all day, much of the night, and possibly longer. Meanwhile, the people who look after the money have noticed that Nigel Farage has been collecting rather a lot more than they think he is entitled to, and have started trying to get it back from him. And his clever scheme of getting what appear to be possibly illegal foreign donations in £500 pieces via payPal may well backfire on him...
Posted by Doctor Dark at 09:02