My earlier post, about a function that could send things to the Google AIY Raspberry Pi Assistant, and supposedly prevent more than one message being spoken at a time, was errmmm, wrong. That's a technical term, that we programmers use.

I wrote a test program for my Pi cluster, whereby each of the sixteen cores would announce its hostname and rank. It's not all that often you get the opportunity to use the word cacophony, but...

Basically, several processes could all think the Assistant was not busy, and they all sent messages in the time it took for the first message to start being spoken.

I spent a while looking at how to program mutual exclusivity for a resource, and was impressed by how complex such an apparently simple thing can get.

I decided that what was needed was a simple program, running on the Assistant, that would watch a directory, notice when a file to be spoken arrived, and speak the text in that file. Python makes it easy to deal with more than one file in the directory. Here's what I wrote...

When it spots one of more files in the Messages directory, it reads the text, and sends it out to be spoken. It can supposedly only do one file at a time, but... Still the cacophony!

A Question of Saffron

Something or other reminded me recently that I can't seem to detect the smell or taste of saffron. A lot of people love it, and write passionately about it. They've smelled it being brought to them even before the waiter came through the kitchen door. They say they've had it explode in their mouth. And I have missed out...
I wondered whether it was just me, or a fairly common thing, to be unable to smell and taste saffron, so I made a Twitter poll. 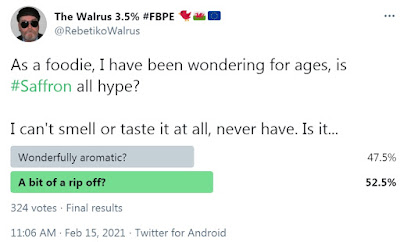 It was worded very poorly. To be fair to myself, at the time, I didn't think about it at all carefully. The result was that it didn't work the way I had expected.
A lot of people thought this was a question about whether saffron is wonderful, whether it is over-priced, or any of several possible interpretations. What I should have actually asked was "Can you smell and taste saffron". Like this...

Of course, this isn't good enough, either, as it discriminates against people who want to say that they can't afford saffron, or have never heard of it. But the worst thing is, all we can tell from the result of the original poll is that about half the people who saw the poll, and answered it,
and about half of them
which actually tells us nothing at all about how many people can detect the taste and smell of saffron, and how many cannot.

Polls. We see lots of them quoted, and they are mostly about politics, and are supposed to let us know how people think about things that matter rather a lot more than whether one can detect saffron.
And a lot of those polls are even less well designed than mine. Some are even designed to make people draw the wrong conclusion, and it's not easy to tell which ones those are, is it? 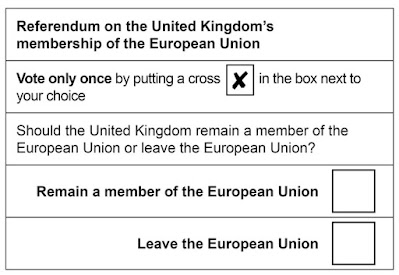 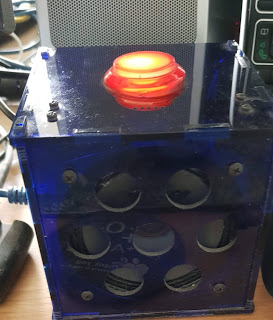 Once I had my Google Assistant running Raspbian Buster, and verified that it could not only answer spoken questions, but also speak text sent to it by other computers, I made a bad mistake.
As a rule, it's a good idea to keep a Raspberry Pi's operating system up to date. Not on this system, it turns out!
I found that doing so stops the microphone working. Other people have also found this, according to the internet, dating back to 2018.
It was simple enough to fix, once I knew that the update was the cause of the trouble. I just flashed the micro SD card again, and copied my configuration files back onto it. Just like that, it was all working again. The files you need to copy back on are assistant.json client_secrets.json and credentials.json, if you were wondering.
In order not to let the same unpleasantness happen again, I disabled the update programs apt and apt-get, using the commands
sudo chmod a-x /usr/bin/apt
sudo chmod a-x /usr/bin/apt-get
Posted by Doctor Dark at 15:53 No comments: 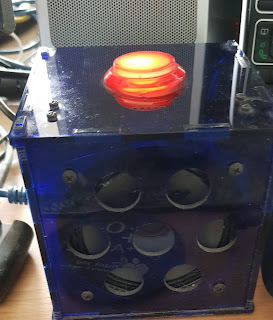 I really like this thing, it's a Raspberry Pi 3B+, with a Google AIY Voice HAT, and a nifty acrylic case instead of the original cardboard one.
I've had it for a while though, and it was still running Raspbian Jessie. Nothing wrong with that, but there are new versions of the AIY Voice software, that can do more things than the original software. I'd rather like my other Raspberry Pi systems to be able to use it as a voice input and output, for example. To do that requires Raspbian Buster...
So that I wouldn't lose all the setup information on the Micro SD card, I decided to upgrade in place. Bad idea!
The upgrade, two steps, via Raspbian Stretch, takes hours. Stretch booted OK, though, so I continued. Buster wouldn't boot up...
All that took over half a day, and it didn't work.
After a bit of head scratching, and a certain amount of exercising my extensive vocabulary of rude words, I did what anyone sensible would have done in the first place, and downloaded a ready-made image, from GitHub and flashed the micro SD card with Balena Etcher.
I had saved copies of the setup information files handy, which I copied in with WinSCP (freeware that's so great I paid for it!), rebooted the Pi, and suddenly it worked!
Posted by Doctor Dark at 14:49 No comments: