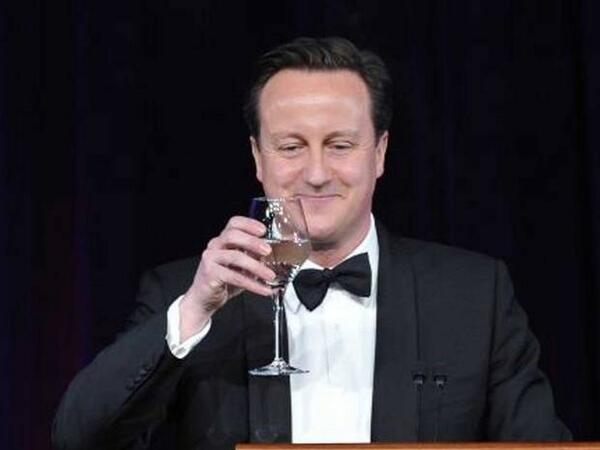 It looks as if one of Cameron's staff has finally managed to distract him from his bottles of champagne for long enough to tell him that everyone hates him, apart from a few barking-mad sycophants, and that he isn't going to be returned to power in 2015 by a loving populace.

The first thing any politician does, in such circumstances, is to sell off, bugger up and break everything they haven't already destroyed, to make things even more difficult for the next government, so they can be blamed.
Apparently, Cameron said:-

"Having modern, technologically advanced and flexible armed forces to protect us and our interests is vital. Because of the difficult decisions we have taken to tackle the deficit we are able to make these vital investments in our defence capabilities."

He is referring to the armed forces he and his team have spent the last four years cutting, of course, and thinks we didn't notice.

Our interests means the big companies that give money to the Conservative Party.

Difficult  decisions is a code phrase used by politicians, which means "doing the opposite of what we swore on oath we would do when we wanted to trick you into voting for us, and telling you it's the only possible thing we can do, even though it will result in the destruction of everything our predecessors worked so hard to achieve, while making the rich much better off".

Tackle the deficit is the way the Tories describe the enormous increases in debt and borrowing they have actually created with their attacks on jobs and the poor.

Here is more of his absurd announcement:-

"That is what we are investing in today. The majority of the money – £800m – is being spent on intelligence and surveillance equipment. It includes the latest in cyber defence technology and surveillance aircraft that can fly over areas like the Horn of Africa, identifying any terror threats to the UK and our allies."

That's right. We are going to throw £800,000,000 (which will almost certainly treble once his friends in the "defence" industry get started) into flying electronic spy planes by remote control over that bit of Africa, so that we are all protected from it.

That is, of course, in addition to whatever vast amount he is going to give to GCHQ to spy on me, so that I too can be protected. I wish he would go back to Fruit Ninja and stop being such an idiot for the rest of the foolishly fixed term of this unelected government.
Posted by Doctor Dark at 14:00

Well said. The more we can expose the duplicity and deceit of these self-serving parasites the better chance we have of getting rid of them