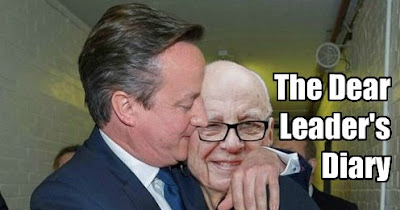 Well, here we are! Another week of our wonderful United Kingdom's new-found democracy, rewarding all hard-working families and not those other people, is almost at a close. An awful lot of lazy slackers are saying I wouldn't have won the election by a huge majority of four, if Rupert Murdoch's newspapers had not all, completely independently, given me their support. The fact is, of course, that I have never even met Mr Murdoch. But the Vote-OK group, chaired by Lord Astor (Samantha's lovely step-father) made it their business to go out and campaign for me in several key seats, where thousands of hunt workers have had ten years without their rightful jobs.

Horrid TV interviewers keep asking me if hunting foxes and watching them be ripped to shreds is my favourite sport, as if they hadn't even heard of West Villa, or is it Aston Ham? Of course, I outfoxed them, by cleverly answering a different question, and saying I hadn't been on a horse in years! It's not difficult to get these people to stop asking the wrong questions, as most of them have never been near Eton. As the survey above, in a tabloid newspaper that Mr Murdoch doesn't own yet, shows, 20% want fox hunting back, and that's nearly as many as voted to get me back. The Queen's Speech will include the removal of the evil Labour ban on huntin' and I'm sure she will purr when she sees it!