I've had a simply super weekend, chillaxing with the right sort of people, the odd case of champagne, and I'm bloody pumped! All the things I am going to announce this week to my adoring citizens are lined up ready, and I will be able to make long, eloquent sound-bites about them. I really am made to rule this 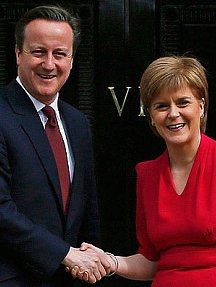 country, apart from Scotland, where my little friend Nicola is happy to help.

She wants another referendum and lots of extra powers, but basically, she melts when she sees me, and I can just walk all over her. All it takes is just the right pressure in a hand-shake, and I'm rather well known for that. I use the one that makes the Queen purr, and Nicola just smiles and issues another series of demands that she must surely realise I won't remember after I have had them removed from the internet. I'm surprised nobody has noticed that I can do that!

Politics is easy! I was made for it.

Later today, I will be speaking to some doctors in a place called the Wet Midlands, and tell them that I will let George give the NHS "at least £8 billion a 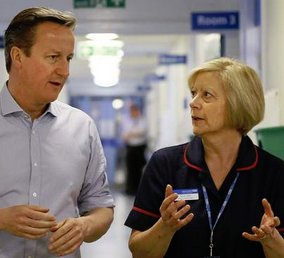 year by 2020". I'm still always amazed that something like that gets accepted without any argument. It doesn't mean they will get £8 billion in any of the years up to 2020, and after another five years everyone will have forgotten there was a National Health Service, anyway.

Well, there will be, but it will be safe in our hands long before then. As long as I keep assuring people it isn't being privatised, I can hand chunks of it over to my friends for much less than it is worth, plus the proper level of donations to the Conservative Party, and we can all make massive profits from it. People are not even going to notice that even if we do give it £8 billion, or any other even bigger amount, from the taxpayers, it will all just go straight to the shareholders. And that's how a health service should work!


I shall tell them that there is nothing that embodies the spirit of One Nation coming together - nothing that working people depend on more - than the NHS, and get the usual enthusiastic applause from the audience the local party branch has provided for me. A good day's work, and I shall be entitled to chillax with some more Bollinger.