Your festival isn't as good as the 1970 Isle of Wight Festival!

Well, this is a picture from the 2012 festival, and the campers had my sympathy. But I think the modern festivals are not a patch on the old ones... 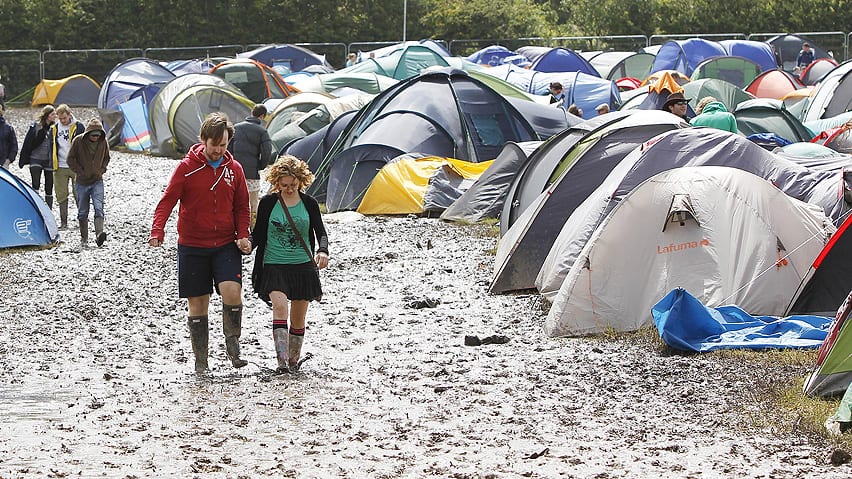 We had five days of brilliant sunshine in 1970. I think we did. It's quite possible I wouldn't have noticed if it was raining. Ahem.

[Italicised, indented text has been lifted from Wikipedia.]

David Bromberg: Bromberg was not on the bill, but he performed a popular set.

I have no memory of those performers, and have not spotted any recordings of them that I can buy.

Kris Kristofferson: Performed a controversial set. Due to poor sound, the audience was unable to hear his set, and it appeared that they were jeering him. He was eventually booed off the stage.

This guy turned up at a Rock Festival and played Country and Western. Fair enough, some variety is needed, but he played it very, very badly. We damned well were booing him, because we could hear him.

Mighty Baby were a welcome relief from the Kristofferson performance. I met their drummer in Southsea once, and he was a really nice bloke.

Anyway, the only thing played on this day that I have a recording of is "Amazing Grace" as played very electrically by "The Great Awakening". That one still sends shivers down my spine! It's on the Message to Love CD.

Gary Farr: The brother of Rikki Farr [the festival compere], Gary had been the front man of the T-Bones, an R&B combo that featured Keith Emerson on keyboards. By this time, he had become a solo artist, and his only album, "Strange Fruit", for CBS Records, had been released in 1970.

Supertramp: Their debut album had just been released a month prior to the festival.

Andy Roberts' Everyone: [Wikipedia says nothing about this.]

Black Widow: a British band that wrote songs about Satan worship in their 1970 debut LP, "Sacrifice".

And finally we come to a performance that is actually available on CD! Terry Reid was good. I sort of remember quite lot of the music on the CD of his set when I play it.

Terry Reid: The English singer performed with David Lindley. The set was released on CD in 2004.

I am not at all certain that I was frenzied...

Fairfield Parlour: They had recorded a single called "Let The World Wash In", released under the name "I Luv Wight", which they hoped would become the festival's theme song. They had also previously recorded as The Kaleidoscope.

But "Amazing Grace" was played every day, at startup, and that's the one we remember.

Arrival: Their set, which included a Leonard Cohen cover, was well received.

The Taste album, "Live at the Isle of Wight" is splendid, with Rory Gallagher playing in his usual amazing guitar style.

Taste: Legendary guitarist Rory Gallagher had a blues trio from 1968 to 1970. This was one of their final shows, which was filmed and recorded. An album, Live at the Isle of Wight, was released of their set in 1971.

Tony Joe White's splendid set is out there on CD, but very expensive. The tracks in question are half of one CD of a four CD set. Great drumming from Cozy Powell, too.

Procol Harum: Frontman Gary Brooker commented that it was a cold night.

Voices of East Harlem: Their set received several standing ovations. Not actually a band, but a bunch of singing school children from Harlem. They had one studio album.

There are apparently a couple of tracks from Cactus on a compilation LP, but I have not been able to find it, and have nothing to play it on.

Cactus: Two songs from their set were featured on the LP The First Great Rock Festivals Of The Seventies.

Mungo Jerry were there but decided not to play.

It was way past their bedtime, apparently.

Joni Mitchell: Played a controversial set; Following her performance of "Woodstock", a hippie named Yogi Joe interrupted her set to make a speech about Desolation Row. [...] After the crowd quieted down, Mitchell closed her set with "Big Yellow Taxi". [1]

Tiny Tim: His rendition of "There'll Always Be an England" can be seen in the film Message to Love. [2]

Ten Years After: British blues rockers performing what was basically a reproduction of their famous Woodstock set. Highlights included "I'm Going Home" and "I Can't Keep From Crying Sometimes," which was featured in "Message to Love". [4]

Emerson, Lake & Palmer: This was their second gig. "Pictures at an Exhibition", which featured the Moog synthesizer was the centerpiece of their historic set. Commercially released as "Emerson, Lake and Palmer Live at the Isle of Wight Festival 1970" in 1997. [5]

The Doors: Their set was shrouded in darkness due to Jim Morrison's unwillingness to have movie spotlights on the band. Their performances of "The End" and "When the Music's Over" are featured in Message to Love. [6]

Sly & the Family Stone: The showstoppers of Woodstock performed to a tired audience on the early morning of Sunday. However, the audience woke up for spirited renditions of "I Want to Take You Higher", "Dance to the Music" and "Thank You (Falettinme Be Mice Elf Agin)", which featured Sly on guitar. Prior to their encore, another political militant decided it was time to make a speech, and the booing audience started to throw beer cans onto the stage. Freddie Stone was hit by a flying can and an angry Sly decided to skip the encore. He did promise a second appearance, but this never occurred. [7]

Melanie: This Woodstock veteran played a well-received set as the sun rose. Prior to her set, Keith Moon of The Who offered her some moral support and encouragement. Not until afterwards did Melanie realize who he was. Her performance of her own song, 'What Have They Done to my Song Ma' was included in a 2010 French documentary, spanning the 1970 and 2010 I.O.W. festivals, called 'From Wight to Wight' and first shown on TV station ARTE, on 30/07/2010. [8]

[1] John Sebastian, Shawn Philips and Lighthouse were not especially memorable, except that I remember thinking Sebastian and Yanovsky's lovey-dovey reunion, and the "borrowing a guitar from the audience" schtick were rather contrived. And all the stuff about what happened while Joni Mitchell was on seemed remote to those who were a hundred yards from the stage. Frankly, a lot of the stuff you read about all the angst going on at this festival was a surprise to those of us who were there. I have the recording of "Big Yellow Taxi"; it's not really rock, I suppose, but a good song.

[2] Tiny Tim was a tremendous surprise. We were more or less resigned to ignoring him, but he was fantastically entertaining and amusing. "There'll Always Be An England" [on the CD "Message to Love"] went down really well, and those of us who were, ahem, enhancing our consciousness were delighted when a hot air balloon took off behind the stage at the end of his set. I really wish the whole of his set was available.
[3] There's some of what Miles Davis and his friends did on "Message to Love", or you can do as I did, and extract his entire set from the DVD "Miles Davis: a different kind of blue". I did it for the sake of completing my collection; I think it stinks.

[4] It's annoying that all I can find of Ten Years After's set is two tracks on "Message to Love", as I was a fan of theirs, and this set was great.

[5] Emerson Lake and Palmer's second gig is an excellent CD, which I have, naturally.
[6] The Doors played a lot better than most critics say, and I have the CD to prove it.
[7] If I was still awake, it's odd that I don't remember any booing or can throwing, but there's an awful lot of exaggerated writing about this sort of thing, that 99% of those who were there say they were not aware of.

Ralph McTell: Despite an enthusiastic reception from the audience, he did not play an encore, and the stage was cleared for Donovan. [3]

Donovan: He first performed an acoustic set, and then an electric set with his band Open Road. [6]

Pentangle: British folk combo. A German woman interrupted their set to deliver a political message to the audience. [7]

The Moody Blues: A popular British act and veteran of the 1969 festival. Their rendition of "Nights in White Satin" can be seen in Message to Love : Their set is featured on Threshold of A Dream Live at the Isle of Wight 1970. [8]

Jethro Tull: Their set is featured on Nothing Is Easy: Live at the Isle of Wight 1970. During Sunday morning the audience were entertained by a rehearsal/sound-check by Jethro Tull. [9]

Jimi Hendrix: The star of the festival performed in the early hours of 31 August with Mitch Mitchell on drums and Billy Cox on bass. His set has been released on CD and video in various forms. In the beginning Hendrix had technical problems, which at one point during "Machine Gun" involved the security's radio signal interfering with his amp's output. David Gilmour from Pink Floyd has confirmed that he watched this Hendrix concert.[10]

At this point, we left to get the ferry, as we had to be in college, in Liverpool the next morning. We did it, but I have no idea how...

Leonard Cohen: Backed by his band The Army, his tune "Suzanne" can be seen in the film Message to Love. In October 2009 audio and video (both DVD and Blu-ray) recording of his set, Live at the Isle of Wight 1970 was released. [12]
Richie Havens: The musician who opened Woodstock closed this festival with a set during the morning of 31 August. As Havens performed his version of "Here Comes the Sun", a cloudy dawn broke, so he changed the lyrics to "Here Comes the Dawn". Havens' set, which is available as an audience recording, also included "Maggie's Farm" by Bob Dylan, "Freedom", "Minstrel from Gault" and the Hare Krishna mantra. [13]

[1] I don't remember anything about Good News.

[2] Apparently the festival organisers felt Kris Kristofferson's reception on the first day was jolly unfair of the audience, and they let him on again. This was met with sullen indifference by the audience.

[3] I can't remember what Ralph McTell did, but I expect it included his miserable "Streets of London".

[4] Heaven? Whatever they did to answer Chicago etc was evidently not memorable.

[5] Free were splendid. All that seems to be available from their set is "All Right Now" on the CD "Message to Love". It's not enough...

[6] I've got an audience recording of Donovan's set. It was fine, if you liked that sort of thing. The sound quality of the recordings leaves a lot to be desired.

[7] Pentangle? Not Rock, but whatever. I don't remember and there seem to be no recordings.

[10] Hendrix was the main reason we went to the festival. We were not disappointed, and anyone who tells you it was not a good performance is silly. And a little suspect. Thank goodness this was recorded. I can confirm that I did not know Dave Gilmour was there. 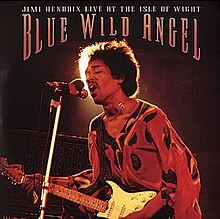 [11] As soon as Hendrix had finished, we set off for the ferry. It was already quite a long way into Monday, and we were supposed to be in Liverpool.

[12] We could hear this as we tramped towards the ferry. At the time, I was not a fan of Leonard Cohen. These days I am, and this CD is very good.
[13] I didn't hear any of this, even at a great distance, and I have not bothered to try to track down the audience recording.
It has taken me ages to describe these five days. I hope it was interesting to you. I had a splendid time...
Posted by Doctor Dark at 13:30